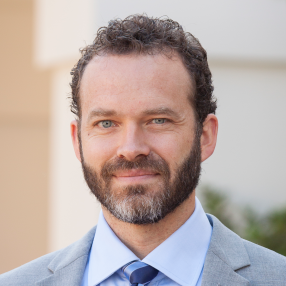 When he arrived at Thomas Aquinas College in 2006, Joshua Noble (’10) was unlike most of the other freshmen: He was 27 years old, a college graduate, an engineer — and an atheist.

Raised in a fundamentalist Protestant home in northeastern Texas, he earned an engineering degree, and then worked for four years with the Naval Nuclear Propulsion Program in Idaho. During this time, while debating Mormon missionaries, he first encountered critical biblical scholarship. “It undermined the fundamentalist biblical foundations of my faith,” he says, leading him to dismiss Christianity as intellectually unserious.

Nonetheless, he continued to seek “some kind of answer to the great philosophical and theological questions” that have intrigued man throughout time. He thus soon found himself drawn to Thomas Aquinas College, with its emphasis on philosophy and theology, as well as its great books curriculum and discussion-based classes. “I applied, got in, and sold everything I owned that would not fit into two suitcases,” he says, “then I made my way to campus.”

At the College he found his future wife, classmate Amy (Schneir ’10), but not his faith. “I had this silly idea that if I investigated everything like a science problem, I could come to a clear, scientific decision about whether or not Christianity was true,” he says. “At the College, I came to recognize that that’s not the way I would ever come to a final answer, but I did come to see that the Catholic intellectual tradition is rigorous and intellectually serious. That removed a lot of my roadblocks to faith.”

The Nobles married two weeks after their graduation, and two weeks later they departed for the University of Notre Dame, where Dr. Noble began a master’s program in early Christian studies. Soon thereafter, he experienced a profound moment of grace.

“I was sitting there, struggling with ideas about myself and sin, when on a whim I picked up a copy of St. Augustine’s Confessions,” he recalls. “I flipped through it for five minutes, threw it down on the bookcase, and said, ‘That’s it. I’m in.’ I was received into the Church three weeks later.”

Over the next seven years he would earn his master’s degree, complete his coursework for a doctorate in biblical studies and, with Mrs. Noble, welcome three young sons. In 2017 the family returned to California when Dr. Noble joined the College’s teaching faculty.