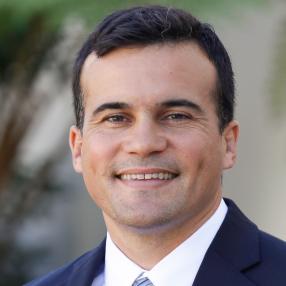 “I always thought it would be great to come back here,” observes Dr. Marco Emerson, a graduate of the Thomas Aquinas College Class of 1997. For a time he envisioned himself returning to his alma mater, inspiring students with the truths of the Catholic faith, as a priest and chaplain.

He was right, in part. Seventeen years after his graduation, Dr. Emerson did return to campus, but not as a chaplain. After pursuing a religious vocation, he discerned a different call, one that led him back to Thomas Aquinas College as a member of the teaching faculty.

The son of a Mexican mother and an American father, Dr. Emerson grew up in various parts of Northern California and Washington and made long trips to Mexico at least once year. As a boy he developed a deep admiration for Mexican piety and a devotion to Our Lady of Guadalupe. “We would visit her shrine every time we were in Mexico City, and I remember watching so many visitors, including elderly men and women, approach on their knees. It was very inspiring,” Dr. Emerson recalls. “There’s a line in ‘La Guadalupana,’ the devotional song for Our Lady of Guadalupe, that says, ‘Desde entonces para el Mexicano ser Guadalupano es algo esencial’ — ‘to be a Mexican is to be a Guadalupano.’”

There were few Guadalupanos, though, in Stanwood, Washington, the dairy town some 50 miles north of Seattle where the Emersons moved when Marco was 11 years old. In this community founded by Norwegian immigrants, he stood out not only for his darker features but, more significantly, for his Catholicism. Although he thrived in his public high school — as both a student and a football player — he came to realize that he was not prepared to defend the Faith. He therefore sought an authentically Catholic school for his college education. Of course, he had a secondary motive for this choice. “I knew very few Catholic girls at the time,” he says, “and thinking I might want to marry one someday, I wanted to go somewhere where I might meet some.”

At Thomas Aquinas College Marco found, to his surprise, not a wife, but a desire to enter the religious life. “When you read about heroism, for the Greeks and Romans, it was about pursuing the great, the noble, and the best of things. Then, when you look at that in the light of faith, you see that the greatest heroism is Christ on the Cross,” he says. “As a student, I was animated by this idea of pursuing the noble, the good, and the arduous. And I thought, ‘What is the greatest battle that has to be fought now?’”

Despite a lingering sense that he may be called to the married life, Marco decided to seek the highest calling and discern his vocation at St. Michael’s Abbey in Silverado, California. His vocations director encouraged him to think of the years ahead as a time of discernment, rather than a definite preparation for the priesthood. Taking the religious name of Juan Diego, he spent several years with the Norbertines, completing a bachelor’s degree of sacred theology at the Angelicum in Rome and then starting work on a licentiate.

After a lengthy period of discernment, however, it became clear that his vocation was not to the priesthood. “I sensed a deep and enduring call to the married life,” Dr. Emerson reflects. “I had a strong sense of soldier-like duty, to fight the good fight and, if you get hurt, to fight hurt. But as I went on, I realized you cannot live your life as a religious and a priest that way; that you cannot simply will to live what God has not given.” Crediting the counsel of his abbot and spiritual directors, Marco left the seminary. He moved to Washington, D.C., to attend the Dominican House of Studies, and there, at a dinner party, met his future wife, Susanna.

In due time, Marco completed his licentiate, and the couple married, relocating to South Bend, Indiana, where he pursued a doctorate in theology at the University of Notre Dame. Over the next five years, the Emersons were blessed with their first three children: Maria, Corazon, and Simeon, who tragically died of a genetic condition shortly after his birth. In the midst of their sorrow, however, they were consoled to learn that they were expecting again, and baby Annunziata arrived in March 2015. Since then, they have welcomed two more sons, Anthony and Santiago.

After completing his Ph.D., Dr. Emerson joined the Thomas Aquinas College faculty on Convocation Day 2014. “I now have an even greater appreciation for the integrated curriculum here that allows us to teach across the disciplines,” he says. “The faculty work together and share a common vision, which is just not the case at most schools.”

More important, he says, is being able to guide students through an academic program that provides “not just an intellectual formation, but a spiritual formation,” as it did for him. “The fruits of this education have to be knowledge and praise of God,” says Dr. Emerson. “It’s about trying to make the life of wisdom your own, and that will always fall short if it is not founded in Christ.”