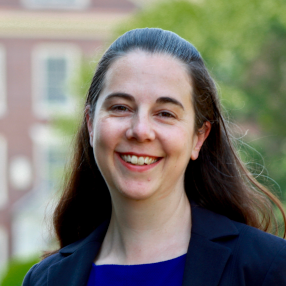 Before coming to Thomas Aquinas College, Margaret Hughes taught philosophy for the better part of a decade. In teaching at the College, however, she has found the experience to be quite different.

“We were looking at a Platonic dialogue in my Freshman Philosophy class, and Socrates was taking the position that pleasure is what’s good, and pain is what’s bad,” Dr. Hughes recalls. “The students in the section had a sense that there was something wrong with this position — they were really unhappy with it. So we had a conversation about it, trying to figure out what objections there might be.” She hadn’t expected such a critical response. “With other students,” she explains, “my work would be just trying to help them to consider that there may be some other ethical standard than pleasure!”

The College’s students, she finds, are exceptionally well-prepared, not only spiritually but also academically, to make the most of their classroom discussions. “Here, every class reinforces students’ confidence in the ability of human reason to know what’s true,” she says. “There’s an understanding across the school about what you’re doing and what’s expected.”

A native of Connecticut, Dr. Hughes is a graduate of the University of Chicago. She earned her master’s and doctoral degrees in philosophy at Fordham University, where she taught undergraduate philosophy, and then served for six years at the College of Mount Saint Vincent in New York.

Many of her favorite moments with students take place outside the classroom. “One of the things that I appreciate most about being here is that it is possible to live a way in which faith, intellectual inquiry, and everyday life are integrated. Getting to know students — by moving from intense discussions of a text in class to wide-ranging discussions outside of class, at meals, concerts, or even just in passing on the quad — is really delightful.” she says. “I have always wanted to teach at a place that has a clear understanding of what education is, one that encourages a shared intellectual life amongst the faculty and with the students. I am very grateful to be here.”