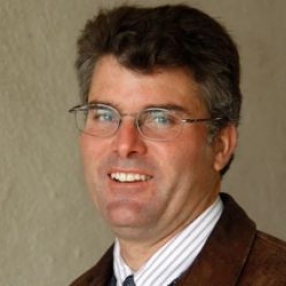 Mike Letteney was a year out of high school, a transplant from Massachusetts, and a lumberyard worker in Ventura, Calif., in the summer of 1984, when he decided he wanted to go to state college. But when he found that the out-of-state tuition he would have to pay at a public college would be comparable to what he would pay at a private school, he decided he would check out private colleges as well.

So he got out the phone book, looked under “colleges,” and the first private entry he saw was “Thomas Aquinas College.” He called then-Admissions Director Tom Susanka, who told him there was still room in the freshman class. Mike got an application, started filling it out, but abandoned it in frustration when he was unable to keep his messy freehand essays from curving over the page. Mr. Susanka called and urged him to complete the form. Mike did, and he delivered it the next day, a Thursday. On Friday, he was accepted. On Monday, he started school.

Mike was raised Catholic, but was unserious about his faith. At the College, however, his studies took root — especially his sophomore-year readings of St. Augustine. It was then that he first realized the importance of living the Christian life. He found a love for philosophy (as well as for his classmate, and now wife, Marilyn Ellis), and after graduation in 1988 wanted to study more. Mike was fascinated with the relationship between modern science and Aristotelian natural philosophy.

He went to the University of Notre Dame, obtaining a master’s degree in the history and philosophy of science, another master’s in philosophy, and a doctorate in philosophy. Dr. Letteney was awarded the distinguished Bradley Fellowship from 1990-93 and from 1994-96, and worked under Dr. Ralph McInerny, helping to archive Charles de Koninck’s papers, organizing a summer Thomistic institute, and assisting at Dr. McInerny’s “Basics of Catholicism” courses. He wrote his dissertation on the 18th century naturalist George Cuvier, who sought to defend the teleological underpinnings of biology against the rising modernists of the day.

Dr. Letteney was also teaching introductory philosophy courses for undergraduates and discovered a gift for teaching. He wanted to return to his alma mater, but no tutor openings existed. So he took a teaching position at Xavier University in Cincinnati, Ohio, where he taught the “theory of knowledge” and various seminars on the history and philosophy of science.

Two years later in 1998, a tutor vacancy arose at the College and Dr. Letteney returned. “I had some apprehension about coming back to be a colleague with men and women who had been my teachers, but I was surprised how quickly that went away. They were so welcoming.”

He is glad to be teaching according to the College’s unique pedagogy. “In the past, I would come in with a prepared lecture and would know exactly the kinds of questions that were going to come up. Here, you have to trust that your students will find their way. Sometimes, you send out the opening question on a wing and a prayer. More often than not, your prayer is answered in the most unexpected and delightful way.”