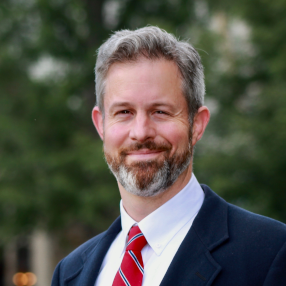 When Patrick Gardner was a high-school student in suburban Milwaukee in the 1990s, two classes captured his imagination: classical literature and economics. One offered a smattering of poetry, philosophy, and history; the other, a coherent, analytical methodology by which to arrive at answers about the common good. Naively, he believed that he had to choose between the two.

“If there was one thing that was pushing me away from the literature, it’s that the arguments seemed too slippery,” Dr. Gardner recalls. “I wanted something sharper, something more logically rigorous.” So when Harvard University offered him admission, he enrolled, with visions of becoming “a hot-shot economist.”

Less than one semester into his freshman year, however, he discovered that modern economics was not what he had hoped it to be. “It was a lot of advanced math put to the service of undiscussed presumptions,” he says. Fortunately, to fulfill a requirement, he had enrolled in a class on classics in Christian literature, where he discovered St. Teresa of Avila, St. Augustine, and St. Thomas Aquinas.

“This is what I’m interested in,” he remembers thinking. “It is poetic and moving, but it is also an intellectually serious, rigorous reflection on what a human being is, how we know things, how we know about God.” His new yearning was “to read more Augustine and Aquinas,” but alas, neither is well represented in most secular philosophy or religion departments. So he sought them out, first in Harvard’s History and Literature program, and then at the University of Notre Dame’s Medieval Institute, where he studied under a renowned Thomist, the late Dr. Ralph McInerny.

During his time at Notre Dame, Dr. Gardner not only earned his master’s and doctoral degrees, but also met his future wife, Kate; and the couple welcomed the first two of their eight sons. After Dr. Gardner completed his studies, the family moved to Austin, where he taught at the University of Texas.

Even though he had found beauty and intellectual rigor in philosophy, Dr. Gardner still sensed that something was missing. “I had always loved math and physics, especially for their clarity and order of demonstration. I wanted to pursue them further in college,” he says. Yet amidst the disconnected departments of modern academia, he thought he had to choose between the so-called hard sciences and philosophical inquiry.

Not surprisingly, he was attracted to Thomas Aquinas College where he has been spared this dilemma. “Coming back to math and the so-called hard sciences as part of a coherent curriculum,” he says, “that’s the missing piece that I’ve been wanting all along.”