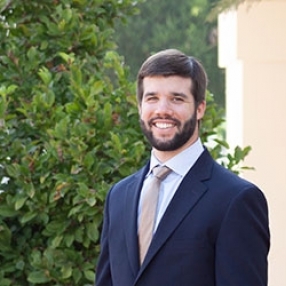 In this, his first year as a member of the Thomas Aquinas College faculty, Dr. Peter Cross is teaching on the College’s California campus. Within the next two years, however, he will relocate to New England, which will be a homecoming of sorts: Dr. Cross spent much of his childhood less than an hour away in Leominster, Massachusetts, and most of his family lives there today.

Of course, coming to California is something of a homecoming, too. Dr. Cross spent four years on the Santa Paula campus as a student, graduating in 2011. It was unfamiliar in the beginning — “My first time on the campus was when I showed up for Freshman Orientation,” he recalls — but soon enough, it became home. “Quickly I started to develop some really good friendships, largely based on the spiritual life and the intellectual life of the community. And many of those friendships have endured to this day.”

As he neared graduation, Dr. Cross considered following in his father’s footsteps to become a psychologist, but he soon discovered that his calling lay elsewhere. Drawing on a passion for politics and government dating back to childhood conversations around his family’s dinner table, he elected to enroll at Hillsdale College’s Van Andel Graduate School of Statesmanship.

“Hillsdale’s program approached political philosophy and American political thought in a manner very complementary to the way we pursue these matters at TAC,” he says. “It was not a quantitative program that merely analyzed and predicted political trends using data and statistics. Rather, it aimed at discovering the fundamental principles of political life, both in general and for America in particular, and how those principles had been upheld or corrupted throughout history. That very much attracted me to their program.”

Upon entering graduate school, Dr. Cross considered embarking on a career in public policy, but while earning master’s and doctoral degrees in politics, he instead found himself drawn back to the classroom — especially when he learned that his alma mater was expanding to his home state, and would therefore be hiring. Now in his first year, he is teaching Freshman Mathematics, Sophomore Philosophy, and Freshman Seminar.

“It is a blessing to teach at a school like this, whether it’s on the West Coast or the East,” says Dr. Cross. “But to have the opportunity to help students get their introduction to Catholic liberal education in my home state, so close to family, in an area that I really know and love — that will be a great blessing. I was open to teaching at either campus, but I was hopeful that there would be need for me in Massachusetts. I am thrilled to have the opportunity to teach in a land that I like to call my own.”