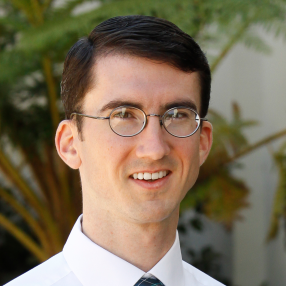 Even when he was a child, Peter Knuffke was a Thomist. “I used to discuss theology with my dad a lot, and when he would describe the different points of view of various theologians, I would always say, ‘No, no! The position that Thomas Aquinas took — that’s the right one!’” he remembers.

When he was 11 years old, and his mother cited “the will of God” to explain why he could not participate in some desired activity, Peter turned to Thomas. “I pulled down the Summa to see what he had to say about God’s will,” he recalls. “Then I started reading, and I thought, ‘That’s pretty interesting.’”

So when it was time for Peter, then in high school, to select a college, the choice seemed obvious. “I knew that Thomas Aquinas College offered a great books program and a serious intellectual life. I also knew that, here, Thomas Aquinas was studied seriously, and that is what interested me most.”

His time at the College, Dr. Knuffke says, “was demanding, but good.” He delighted in the four years of theology and, of course, reading St. Thomas, as well as Aristotle, Boethius, and Dante. He augmented his study of Latin by meeting weekly over lunch with two of his tutors, John Nieto and Steven Cain, to translate St. Augustine’s Confessions. “Usually we would discuss about two to three lines of the translation before we would get lost in a massive conversation about the text,” he laughs.

After his graduation from the College in 2004, his love of learning brought him to the Pontifical Salesian University in Rome, where he studied classics and patristics, earning a licentiate and doctorate in Christian and Classical Letters. He then spent two years conducting research in Eastern Christian theology in Athens, Greece, while completing his dissertation. It was during that time that, looking at his bookshelf, he noticed that his most beloved tomes were the great books from the College’s curriculum. That realization led him to look into the possibility of returning to his alma mater as a member of the teaching faculty.

Now back on campus, what Dr. Knuffke most enjoys about being a tutor is introducing students “to the great masters of the intellectual tradition.”