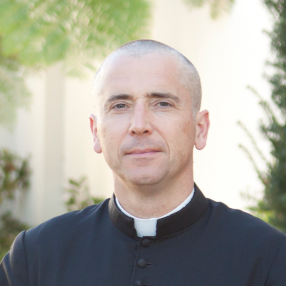 Born in the Polish city of Gdansk, Rev. Robert Marczewski first came to the United States while a seminarian. “I came to Ss. Cyril and Methodius Seminary in Orchard Lake, Michigan, the Polish-American seminary,” he recalls. “Traditionally it has provided priests for the needs of the Polonia in the U.S., but more recently its priests have served wherever there is need, and that brought me to the Archdiocese of Philadelphia.”

Ordained in 1995 by the late Anthony Cardinal Bevilacqua, Fr. Marczewski served for 14 years in Philadelphia parishes. He then returned to Ss. Cyril and Methodius Seminary, where he was for seven years the dean of spiritual direction. He is the author of the book A Legacy of Saint John Paul II: The Reception of John Paul II’s Theology of the Body in the Catholic Church in the United States of America.

“I was blessed to meet John Paul II several times in person, and I always took something from these meetings,” Fr. Marczewski reflects. “He could be in the presence of many people, but when you were before him, he gave all his attention to you.”

In his current assignment as a chaplain at the College, his work with students is “the best part,” Fr. Marczewski observes. “Seeing young people in the Chapel, attending daily Mass, availing themselves of the Sacrament of Penance is very inspiring. I am much impressed by the desire for God that I see in them.”