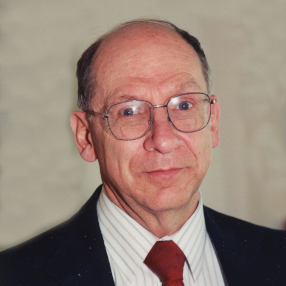 Dr. Ronald J. Richard was a tutor at Thomas Aquinas College from 1976 to 2011. Previously he was a research engineer at Jet Propulsion Laboratories in Pasadena, Calif., working with the space program. He initially was involved in calculating preliminary trajectories for launches to the moon, Venus, and Mars, and was later involved in the theoretical design of space computer programs. He found it always interesting, but not always satisfying. Meanwhile, he was working on his doctorate in astronomy at the University of California, Los Angeles, and fell in love with teaching. He wanted more of it. Two experiences then led him to a career change.

“One day, my wife and I came out of the supermarket and saw an ad on a bulletin board for the ‘Great Books of the Western World.’ It looked interesting. So we filled it out and sent it in. A salesman then came by, and before he left he had an order for the books. When they came, I tried to read them, but couldn’t get very far. I tried reading Aristotle and Newton but got nowhere.”

His second experience came when he was at UCLA and went to the library to find a book on speed-reading. He found instead a book on slow-reading, How To Read A Book, by Mortimer Adler, one of the founders of the Great Books Movement. “There it was again,” he thought, “a reference to the Great Books.” He thus found that he was interested in something in addition to science and math, and decided that he would like to teach at a small Catholic college in a department that combined physics and astronomy. (He holds one doctorate in astrophysics and has completed the coursework equivalent to a doctorate in physics.)

Dr. Richard sent out 40 inquiry letters and got one offer from Benedictine College in Atchison, Kansas. He took it. At the faculty picnic before classes started, he met the chairman of the Philosophy Department, Dr. Donald Scholz, and decided to audit some of his courses.

He became fast friends with Dr. Scholz and one day in the early 1970s confided that he would really like to teach, if it were to exist, at a “Catholic St. John’s College,” (referring to the esteemed Great Books program initiated at St. John’s). Dr. Scholz referred him to his cousin, Marcus R. Berquist, who in fact, was founding such a college.

Thus, in 1972, in the College’s second year, Dr. Richard traveled to California to meet the faculty and to give a lecture on “the nature of time.” Over the next three years, Dr. Richard’s interest in philosophy under Dr. Scholz grew and he decided to talk to Dr. McArthur about coming to the College. “They saw that I could help get their junior and senior science programs going,” says Dr. Richard. That was fine with him, since he could get involved in the philosophy and theology courses as well.

So in 1976 Dr. Richard began teaching at the College and greatly enjoyed doing so until his retirement. He was happiest when his students learned and when he also learned, which is what the College has intended from the beginning. He now resides with his wife in Ojai, California. They have three children and four grandchildren.