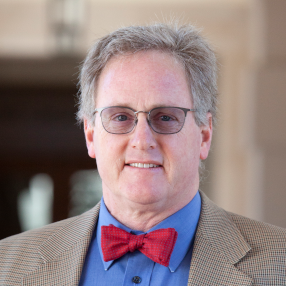 Cheating on tests was no big deal when Steve Cain was in high school in West Palm Beach, Florida. He couldn’t understand why his freshman classmate wouldn’t help him with answers on their Latin test. But Tony Andres was unlike everyone else. For starters he was the only kid Steve knew, including himself, whose parents hadn’t divorced. He was smart, athletic, and came from a family that would stay up late discussing interesting things. And he was Catholic.

Steve was amazed that Tony wouldn’t help him cheat. That struck him as a good thing. He then had many serious conversations with Tony about many serious issues that started him down the road to faith. The oldest of three children, Steve was baptized Episcopalian, but he was functionally pagan, raised without any church involvement. “Tony never openly proselytized me; he simply explained his position about things I couldn’t fathom, like why he wouldn’t go to the mall on Sunday.”

On graduation from high school, Tony came to Thomas Aquinas College; Steve “wasted” a year at Florida State University. They continued to correspond and to visit on breaks and their conversations became even better. Steve could see the impact of the College on his friend. He toyed with the idea of enrolling himself, but didn’t think it would be worth going so far from family and friends. And, besides, it was Catholic and he was not. He decided to head back to the northeast near his father and attend Connecticut College.

In the meantime, he kept talking to Tony, to good effect. At the beginning of his junior year, Steve became Catholic. “It’s a sure sign of God’s existence if you can convert at a place like Connecticut College,” he says. What Steve didn’t know is that Tony had asked his College friends, including a young sophomore girl, Mary O’Hara, to pray for him.

During spring break later that year, Steve came to visit Tony at the College. At the first class, the tutor was late due to car problems. Steve was amazed to see students start the class without him. He was even more impressed when the tutor showed up halfway through class and inconspicuously, but naturally, entered the conversation. Campus curfew, single-sex dorms, and night prayers were other curiosities. He saw they were good and regretted not attending the College himself.

But God had other plans in store. Talking with Tony made Steve interested in Aristotle and St. Thomas. The philosophy offerings at Connecticut were constraining, so he switched to classics and double-majored in physics, graduating with honors in classics and distinction in both majors.

At Tony’s recommendation, Steve moved to Boston to teach physics and philosophy at a Catholic high school and to audit a philosophy course at Assumption College taught by Professor Duane Berquist, brother of Thomas Aquinas co-founder Marcus R. Berquist. Steve was smitten by Berquist’s erudition and began to participate in what was to become 10 years of study groups under the famed Thomistic professor. Joining the group was Mary O’Hara, freshly graduated from Thomas Aquinas, pursuing graduate studies at Boston College. The two fell in love with more than just St. Thomas’ commentary on Aristotle’s physics. They married two years later.

Steve taught for a year at Trivium Academy, a classical high school in Lancaster, Massachusetts, and then attended Catholic University for graduate studies in Greek and Latin. After completing coursework for a master’s degree in classics, he returned to Boston College and obtained master’s and doctoral degrees in philosophy. While pursuing graduate studies and private home tutorials from Duane Berquist, he served as Professor of Humanities at the Legionaries of Christ college seminary and its Center for Higher Studies.

In 1998, a tutor position opened at Thomas Aquinas and Steve jumped at the chance. For him, it was a chance to make up for lost time; for his alumna wife, Mary, a homecoming. They have six children together.

Steve says teaching at the College is humbling. “Generally a teacher is expected to have a command over the material. But under this teaching format, students ask questions that you may not have the answer to. The goal is to be able to say, ‘I don’t know,’ and then work together to find the answer. You bring out a sense of the common enterprise that way. And you really see that tutors are fellow students here.”

Steve loves the interaction with students. “Conversations inside class often spill outside class. You have meals with students, social activities with students, you develop a friendship with students — which is how the intellectual life should be, a common endeavor. When I taught as a lecturer, I’d come out of classes drained. But here, I come out invigorated.”

And Steve still sees much of his old friend Tony Andres, who is now also a member of the College’s teaching faculty.