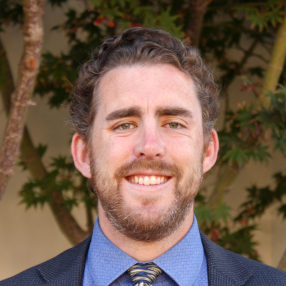 He may have attended dances in St. Joseph Commons, slept in the men’s residence halls, participated in discussions about the great books, and attended Mass in the Chapel, but Travis Cooper was never actually a student at Thomas Aquinas College. Although given the frequency of his campus visits and the number of friends and family members who were students at the College, there certainly were times when he felt, or wished, that he had been one, too.

A native of Palm Springs, Calif., Dr. Cooper earned his associate’s degree at St. Mary’s College, his bachelor’s at the College of St. Thomas More, and his master’s and doctorate in philosophy at the Catholic University of America. It was while at CUA that he came to know Thomas Aquinas College well, first through his sister, Kathryn (’06), and then through her classmate — and his future wife — Briena (Dunkel ’06).

“I came back here whenever I could,” he says, recalling the long-distance courtship that reached from California to Washington, D.C. During “at least a dozen” trips to campus over many years, he was, he says, “astonished at the quality of the student life.”

In the College he saw a commitment to liberal education for its own sake which, in turn, fostered in its students a love of truth, a devotion to the Faith, and deep friendships. “I learned during my own experience, first as a student and then as a teacher at another small Catholic college, that it’s not easy to establish a good, vibrant student life,” Dr. Cooper reflects. “I’ve always been amazed at how the College has managed to achieve that, and how wonderful it is to be a student here.”

Dr. Cooper remembers looking into a teaching position at the College after completing his coursework at CUA, but instead he and his new bride returned to his alma mater in Fort Worth, Tex. There, he taught Latin and philosophy for several years, and the couple welcomed three children, all boys.

When Dr. Cooper became aware of an opening on the Thomas Aquinas College faculty last summer, he was eager to apply for it. “Over the course of my teaching, I began to see in more detail and with more conviction what a college curriculum needs to look like and what the spirit of a college is. Thomas Aquinas College has, better than any Catholic college in the country, achieved that goal. So it is a dream come true that I now have this opportunity.”

He enjoys the interaction inherent in the College’s use of the discussion method, he says, which is a departure from the lecture-based teaching he has done in the past: “It’s more difficult than it looks. Rather than planning beforehand exactly what you are going to say, you must chart where the conversation needs to go, and how to get it there. In class it takes constant, active awareness.”