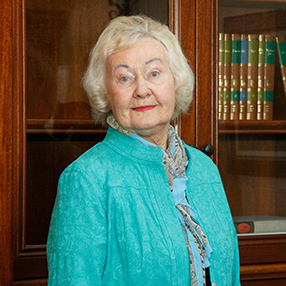 As a child, Mrs. Jatulis and her mother fled their native Lithuania during the Soviet reoccupation following World War II. The family spent four years at a displaced persons camp in Germany, then  migrated to Montreal, Canada, where Mrs. Jatulis worked for one year as a maid’s helper, earning $1 a day. She next took a job at the Royal Bank of Canada, while studying by night at the University of Montreal, before earning a master’s degree in library science at the Dominican University in River Forest, Illinois. She then met and married her husband, Gediminas, and the couple moved to New Jersey, where she worked for one year as a librarian at Fairleigh Dickinson University before stepping down after the birth of their son, Darius.

Years later, the family relocated to California, and in 1971 Mrs. Jatulis read in the Los Angeles Times about a group of Catholic educators who were planning to form a new, classically liberal college just 10 miles from her home in Woodland Hills. With her son now at school, she was ready to work part-time and applied to become the College’s first librarian. “I believed in the College, and I wanted to be part of it,” she says. Later that year, when Thomas Aquinas College opened its doors at its first campus in Calabasas, she was among the original members of the faculty.

“We started with one set of the great books and nothing else,” Mrs. Jatulis recalls, a situation that she promptly set out rectify. “On Tuesdays and Thursdays I would hop in the car and visit other libraries, one after another,” amassing a collection worthy of the College’s mission. Fortunately for the College — though not for Catholic education more broadly — that was during the period of widespread confusion immediately following the Second Vatican Council, when many Catholic schools heedlessly jettisoned their copies of Augustine, Aquinas, Church fathers, and many other great books. Their loss proved to be Thomas Aquinas College’s gain.

In 1978 the College moved from its original facilities to its new — and, at the time, entirely undeveloped — campus in Santa Paula. The first library on the new campus was a trailer. “We did not unpack all the books; there wasn’t room,” says Mrs. Jatulis. “If someone asked for a certain text, I would have to get it out of the boxes in our storage containers.” Then came the first permanent building on the new campus, St. Joseph Commons, the College’s dining hall, which also housed the library for some 15 years. “We were in what is now the ping-pong room,” she remembers. “Our shelves were in the coffee shop.”

When the College was finally able to construct its permanent library, St. Bernardine of Siena, Mrs. Jatulis played an active role in its design. “I usually go to Europe in the summer, but that summer I stayed on campus because we had special planning meetings,” she recalls. “I visited many other libraries to get ideas.” When the library was completed and dedicated in 1995, “everything changed,” she reflects, “it was so wonderful.”

Eager to fill the new space, she continued to expand the collection, which now stands at about 65,000 books and recordings. “We could have had many more books, but we don’t keep everything,” she explains. “It has to be related to the program, or a book of exceptional quality.” Among the volumes that the College cannot use, Mrs. Jatulis sends a good number every year, as needed, as a personal gift to a seminary back in Lithuania.

Throughout the years, Mrs. Jatulis has also assembled a rare books collection, featuring a wide array of unusual and valuable works as well as other treasures, some priceless, such as invaluable letters written by many saints, illuminated manuscripts, and works of Aristotle and St. Thomas dating from the 16th century. Maintaining this collection — and showing it off to the College’s visitors — is one of her professional joys.

In 2016 Mrs. Jatulis stepped down after 45 years as head librarian and reduced her work hours to part-time. She says she is not ready to leave just yet. “I know I should be retired,” she says. “But I enjoy the students, I enjoy the people, and my health is good.”

“We will be forever grateful to Viltis for all that she has done professionally for the College,” says President Michael F. McLean, “and for making the Library an integral part of our educational program.”