On Thursday evening workers installed the crowning jewel of Our Mother of Perpetual Help Chapel at Thomas Aquinas College, New England. In place of a towering pipe organ which dominated the sanctuary for decades, and in place of the gaping, empty cavity which has confronted students since they first arrived at the Northfield, Massachusetts, campus, there now stands a magnificent altar, reredos, and matching tabernacle. The century-old building’s transformation to a Catholic place of worship is now one big step closer to completion.

Workers have been renovating the Chapel’s sanctuary all week, and the fruits of their efforts became all the more evident on Wednesday, when the new altar arrived. Next, ecclesiastical painters will begin the two-to-three-month process of painting the sanctuary, which should be complete by the end of the academic year.

Yet even now, anyone entering the Chapel cannot help but be riveted by the white marble of the altar, standing out in sharp contrast to the rich, intricate carvings of the tabernacle. From there, one’s eyes move irresistibly upward to the breathtaking centerpiece of the reredos. The Chapel is now possessed not only of an unshakable orientation toward heaven but also of a worthy place to adore the Word made flesh.

“The altar itself is a marvelous work of craftsmanship, with all the floral carving and pointed grandeur of medieval churches,” reflects sophomore Thomas Aldredge. “But over and above that, it feels as if the Lord has taken up His rest, as the Psalmist says, ‘Let us go into His sight in exultation … for the Lord is sweet!’ (Ps. 99:2,5) Now the campus has a permanent center.”

“For the rest of my time here,” he concludes,” and for the rest of the long life of the New England campus, I can be sure that even as the world turns round with all its insecurity and pain, the Cross stands still with love.”

The College’s students were able to worship at the altar for the first time Thursday night, as Our Mother of Perpetual Chapel hosted all-night adoration in honor of the victims of abortion on the eve of the 48th anniversary of Roe v. Wade. Throughout the evening, as well as the early hours of Friday morning, they gazed upon Our Eucharistic Lord, in the fittingly beautiful setting of the newly renovated sanctuary, praying for His mercy and peace. 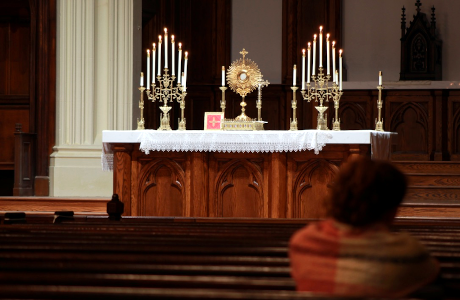 The College community eagerly anticipates further additions to Our Mother of Perpetual Help Chapel, which will continue fostering an atmosphere of awe and reverence for any who step over its threshold. 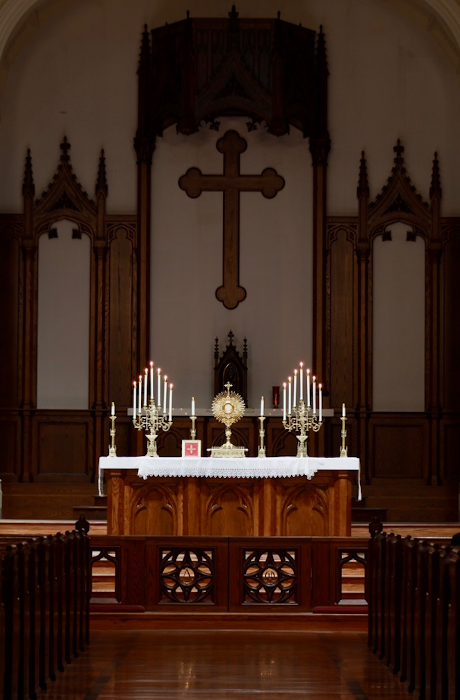