A Brother’s Eulogy for Rosie Grimm (’10)

“This will I say of her: She had a mind that envy could but call fair.”

When I think about my sister Rosie in the last two years, there are many beautiful and victorious images that spring to mind: Rosie teaching driving instruction; Rosie practicing agility with her dog, Pippin; Rosie sewing with the nieces, doing swordplay with the nephews; Rosie bowing as everyone applauds her play; Rosie lying down on a blanket in the sunshine; Rosie in prayer; Rosie holding her godchildren in her arms; and Rosie offering up her sacrifice with Christ in the days before her death.

These images are beautiful to me because they show the joyful life she had and the happiness she brought to others. They are victorious because she lived this beautiful life, and brought this joy even as her condition worsened and her life came to a close. 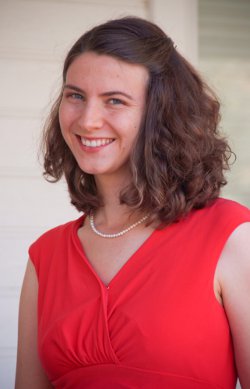 I remember thinking a few years ago, when Rosie was initially diagnosed with melanoma, that cancer was the best thing that could have happened to her. She had hit a crossroads in her life and wasn’t really sure where to go next. In the two years after her initial diagnosis I saw her take up new challenges and tests, and triumph over each of them:

All through this time I saw her strengthening her relationships with her family and her friends, seeking out new friends, and becoming closer with those she already had. On the side Rosie continued to write poetry; sew quilts and costumes; do photography; listen to and read many books; sing in choir; tutor; spend many hours playing with and teaching her nieces and nephews; go on pilgrimage to Italy, France, and England; and become the godmother of two more of her nephews.

Beyond all this, and far surpassing it, Rosie became a deeply spiritual and saintly woman, receiving spiritual direction, attending daily Mass, and spending many hours before the Blessed Sacrament. While I will forever be in awe of her many accomplishments, it is for this last one that I most applaud her. Because of the peace I saw grow in her then, I feel a deep peace now.

Rosie’s example of faith was a surprisingly subtle one, one which, to be honest, I didn’t truly recognize until the last month or so of her life. When people would come up to me again and again, or e-mail or message me, telling me how inspirational and Christ-like my sweet sister was, it rarely resonated with me. Nothing about Rosie’s behavior surprised me, and I think this is truly telling of who Rosie had become. For her, virtue had become normal. She brought a gentle holiness into her everyday actions. I never thought of her as “saint-like.” Rosie wasn’t a saint. Rosie was just Rosie. It was only in the last couple of days that I realized that holiness was simply what I had come to expect of her. 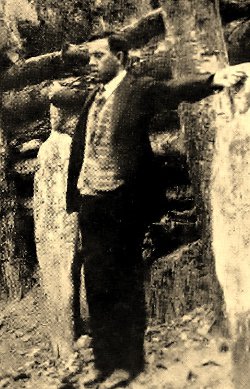 Bl. Miguel ProLike Bl. Miguel Pro, one of her patrons, Rosie had a holiness that was uniquely tied to her humor and wit. A couple of months ago my brother Danny, Rosie, and I were disputing about what movie we should watch. I asserted my right to choose the film because I was the youngest. Rosie countered, “I should get to decide, because I’m a VICTIM SOUL!” We all laughed, and I said “You’re not a victim soul if you call yourself a victim soul!” While her words were said as a joke, I honestly believe that there was a greater truth behind them, that Rosie had aligned herself with the will of God in the quietest of ways. She wasn’t performing miracles, but her faith itself was a sign of grace, itself a miracle.

Only days before Rosie died, she and our sister Wendy-Irene were speaking, and Wendy said, “Rosie, you’re carrying the cross.” Rosie responded, “Thank you … I think I should find some little gadget to help me carry my cross.” The idea quickly escalated into plans for “The Help You Carry Your Cross Boutique, for all your carrying-your-cross needs.” This perfectly illustrates how Rosie could cheerfully embrace the challenges God had sent her, and always be willing to crack a smile to cheer everyone else up too.

Growing up, I didn’t notice Rosie as some incredibly holy, miracle child. She was much like the rest of my siblings. But somehow that makes the deep holiness she accomplished even more beautiful and profoundly comforting. To me, Rosie is a beautiful example of the holiness that even “normal” people can reach if they truly give it all up to God.

Faith, hope, love, patience, and gratitude defined Rosie’s last days. When we first announced that Rosie was beginning hospice, letters, flowers, meals, and prayers came pouring in from all directions. For days new shipments of flowers came practically hourly, and the list of people making us meals stretched out through September and only stopped there at our request. Friends came and visited, others who could not come personally sent letters, messages, and love. The wonderful “Sing-Sing” party with our cousins, which we had only a few weeks before Rosie died, is definitely the stuff of legend.

As I sat in the room with Rosie, and we listened to so many of our extended family sing — Rosie herself singing loud and clear — I saw her cheering for them and demanding that various relatives come in and kiss her. I felt the grace of God surrounding us. The gratitude she felt for all the support was profound. Again and again she said, “I can’t tell you how grateful I am for your coming down to see me … for the flowers … for the prayers … for the cards…” The power of prayer was an immense comfort and, I have little doubt, a huge source of the peace Rosie experienced at death.

There are two memories that I have of Rosie that especially stuck out in my mind as I composed this eulogy. The first occurred a few weeks before her death, and the second, last Thursday, the day she died.

One of Rosie’s deepest wishes was to see her nephew Carl Daniel and be able to be his godmother. When Carl was born, we had the baptismal Mass at our house. By that point walking had become extremely difficult for Rosie, and she sat throughout the Mass holding her godson in her arms. As I watched the baptism, the words of the funeral rite came back to me: “In baptism she died with Christ, may she also rise with Him.” Seeing baby Carl in her arms, I felt like two people were dying in a way: Carl dying to sin in baptism, and Rosie, dying to herself. Both had entered into Christ’s death and resurrection. At most baptisms it is easy for me to forget that Christians are called to die both to sin and to themselves. It is easy to forget about the whole death part of baptism when you are holding a newborn baby who has his whole life ahead of him. Watching this baptism, and thinking about it now, I realized that Rosie was drawing closer and closer to the very reason for baptism — union with Christ in heaven.

The last memory I want to speak of happened the day Rosie died. I came home for a few hours between classes to sit with her. She was clearly in a lot of pain, and as I sat by her bed, I found myself begging God to release her from it. My mom came in and gently broke off a small piece of the Eucharist to give to her. At this point it was incredibly hard for Rosie to swallow, and breathing was becoming increasingly difficult. Watching her take the Eucharist, even when it was so hard to do something as simple and elementary as swallow, moved me deeply. I know my sister didn’t want to die. She loved life and had many hopes and dreams which she never saw fulfilled, but watching her take that tiny piece of the Eucharist felt like hearing her say “Yes” to God, even when it meant giving up everything the world had to offer.

Rosie wanted many beautiful things from life, and even though things didn’t always turn out the way we had hoped, I believe that in her death, everything she asked for was given. When she sent out the Bl. Miguel Pro prayer a few weeks ago, I asked her, “What is the answer you want to this prayer?” Her response impressed me: “I’m asking for healing, or a brave death.”

God didn’t give Rosie physical healing, but He gave her the true healing of dying in His grace, surrounded by her family, the prayers of the faithful, the relics of the martyrs, and the blessings of the Church. At the time of her death Rosie was encircled by the thoughts and prayers of literally thousands of people all over the world, and I don’t think those prayers could possibly have been in vain. This is not to say we should stop praying for her; indeed, Rosie is the last person who would want to be canonized at her funeral. However, as I thought about her today, the words of the Song of Songs, which Rosie loved, came to my mind like the voice of God calling out to her:

Goodbye, my sweet Rosie. May your voice soon be numbered among the voices of the communion of saints singing the praises of the God you loved so much and served so faithfully. May you rest in peace.