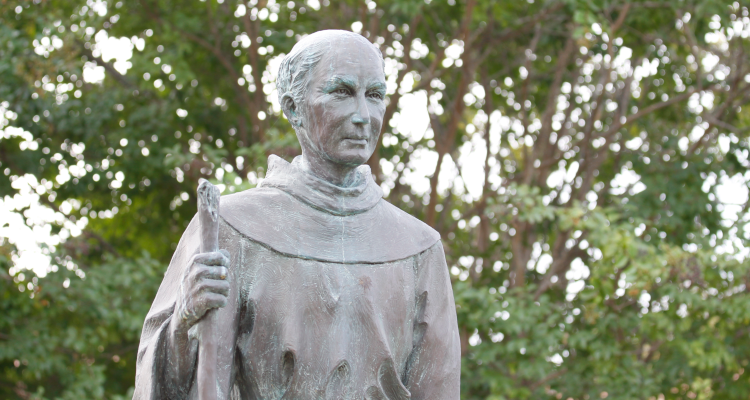 The students, faculty, staff, and alumni of Thomas Aquinas College celebrate His Holiness Pope Francis’s canonization of California’s beloved patron, St. Junipero Serra! Tonight, the men of Blessed Junipero Serra Hall (soon to be renamed Saint Junipero Serra) will sing at a Mass held in their namesake’s honor. Tomorrow, the entire community will gather for a community-wide Mass at 11:15 a.m., followed by a procession to his statue.

Meanwhile, alumna Suzie (Zeiter ’87) Andres has written a lovely essay about the holy death of the Church’s newest saint on Catholic Exchange, in which she also recounts a fascinating anecdote about the history of the College and the Franciscan who founded the first nine of California’s missions:

Campus statue of St. Junipero SerraViltis Jatulis, faithful Lithuanian librarian of St. Bernardine Library at Thomas Aquinas College, once received a donation of books that had belonged to a great Catholic lady (she and her husband, and then their son and his wife, all generous benefactors). Upon perusal, Viltis found that one of the books was an old diary. A really old diary. A really old diary of Father Junipero Serra. Viltis, a less grasping and a holier hunter-of-relics than I, contacted the donor and arranged for the diary to go where it belonged — to one of Father Serra’s beloved missions and home of [Monsignor Francis J. Weber, archivist for the Archdiocese of Los Angeles], the San Fernando Mission.

For those of us who wish we had a relic of Father, let us not forget that we have the largest relics of all — the California missions. And for those who live too far to visit, a yet more valuable gift is available upon request — his friendship. Thanks to God’s mercy, this day Junipero Serra is enrolled in the canon of the Saints; there is no distance between Heaven and earth, only a thin veil, and today that veil is lifted. Behold Father Serra in Heaven, but he is looking down kindly, desiring more than ever to show God’s great love to us.

St. Junipero Serra, pray for us!