College to Say Goodbye to Fr. Buckley after 17 Years 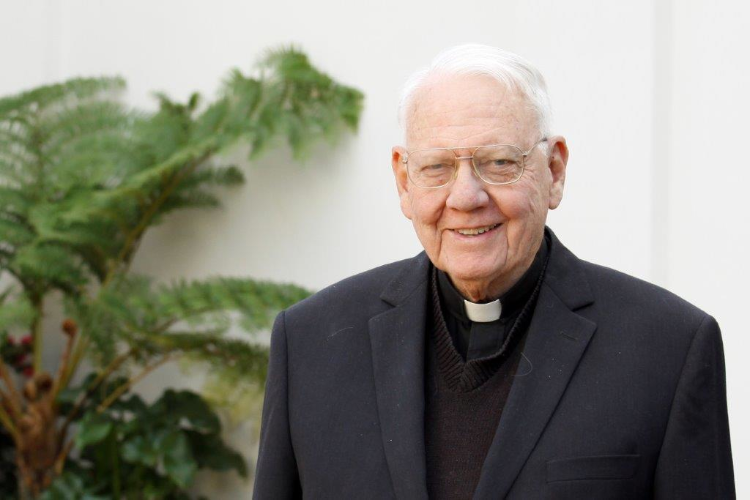 This fall, shortly after students have returned for the new academic year, Thomas Aquinas College, California, will bid farewell to its beloved chaplain of these least 17 years, Rev. Cornelius M. Buckley, S.J.

“I like to compare Thomas Aquinas College to the maraschino cherry on top of the whipped cream that covers the spiritual sundae that I’ve been enjoying for years,” says the ever-smiling priest known for his generous spirit, his deep faith, and his razor-sharp wit. “The nicest part of my life as a priest has been right here. But all these good things come to an end, and I’m ready to take the next step.”

Fr. Buckley will depart the campus he has called home since 2004 just months shy of his 96th birthday on November 2 — “All Souls Day, the Day of the Dead!” he quips — and less than a year before the 60th anniversary of his ordination as a priest, July 31, 2022. He is headed for the Sacred Heart Jesuit Center, some 350 miles north of the College in Los Gatos, California.

“I call it the Jesuit Finishing School, or burial above ground,” he laughs. “But I’m under obedience, and my provincial tells me that this is what I should do, so that’s God’s will, and that’s where I go. I’m sure that this place where I’m going will have a lot of great opportunities to do spiritual work. I can pray for the TAC community there a lot more than I do here; so the Lord gives me a schedule.”

In his years at Thomas Aquinas College Fr. Buckley has been a tireless servant of the community. Throughout his time, he has lived in the residence halls, thus allowing him to hear confessions at all hours and play an active role in the lives of the College’s young men, a good number of whom he has helped to discern vocations to the priesthood or religious life.

“I always say a prayer of thanksgiving when I hear the guys yelling and waking me up,” he laughs. “It’s always great news. What a wonderful place to be!”

For the men in St. Kate’s, life doubtless won’t be the same without their priest. “He’s been such an attentive chaplain and has always had such an insistence on how he’s there for the students,” says senior Joe Grumbine, a three-year resident of Father’s residence hall. “He’s always ready and willing to talk. His door is always open. He makes you want to work better, makes you more focused on growing in virtue.”

It is not only students whom Fr. Buckley has inspired over the years. “Fr. Buckley’s example has set a wonderful standard for me during these years at Thomas Aquinas College,” says Head Chaplain Rev. Paul Raftery, O.P. “He does not hold back in his priestly apostolate and generosity to the students — uniting himself as completely as he can with the heart of Christ, and inspiring me to do the same.”

The Jesuits have graciously agreed to postpone Fr. Buckley’s next assignment until after the start of the new academic year, so that the College’s students will have a chance to say goodbye in-person. On August 25, the College is planning a campus-wide luncheon to offer a fitting farewell to this Jesuit Giant.

“Fr. Buckley has been a chaplain here since 2004,” reflects President Michael F. McLean. “In that time, he has been a wonderful friend, confessor, and an inspiration to faculty, staff, and students alike. This is an opportune moment to salute him and express our thanks for his years of service.”