For the Greater Glory of God: An Interview with the Most Rev. Michael C. Barber, S.J. 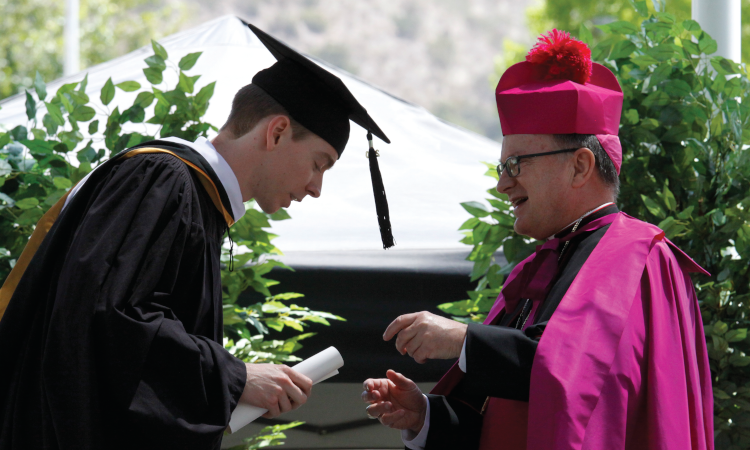 The Most Rev. Michael C. Barber, S.J., Bishop of Oakland, was Thomas Aquinas College’s 2020 Commencement Speaker on June 18, 2021, when the following interview was conducted.

How has the Diocese of Oakland fared during the pandemic?

Well, we haven’t had any priest deaths, but we have had about a dozen priests get very sick, and some parishioners have died. One of the hardest things about the pandemic was priests not being able to have access to anoint people and give them the Last Rites. A lot of people told me they were not able to visit their mothers or fathers on their deathbeds, and so it was really hard to say goodbye.

As far as Mass attendance, we have pretty much followed the county and state guidelines. It was very hard when we couldn’t have anybody indoors and we were doing livestreamed Masses from the cathedral. People still came and pressed their faces to the glass window outside the cathedral, and we would take Communion outside afterward.

We tried everything we could to tell people, “We’re still open for you.” We would have drive-through Communion. We would have walk-up Communion. We had drive-in Anointing of the Sick, and people brought the elderly in their cars. I think the people were grateful for the outreach. A few parishes did no outreach; the pastor shut the doors and posted a sign “We’re closed.” That’s not right, and those churches are now in bad shape. But in general the priests were very good, and things are going well.

Can you tell us about how you met Thomas Aquinas College’s beloved chaplain Fr. Buckley when you were a young man?

When I was in high school in Sacramento, a friend and I attended a Jesuit vocation retreat led by Fr. Buckley, who was then the rector-president of St. Ignatius High School in San Francisco. Well, about one year later he drove out to my high school to visit me as a follow-up to the retreat. I was just stunned. I was in a class, and the principal came to the door, called me over, and says, “There’s a priest here, a Jesuit, who wants to see you.” And Fr. Buckley said to me, “Can we have a little chat? I just want to encourage you.” I said, “Wow, did you have business in Sacramento?” And he said, “No, I wanted to just come and check in. I hope you’ll persevere in your desire to be a Jesuit.” That made quite an impression on me — the rector president, a Jesuit priest — what I wanted to be. Wow.

What inspired you to become a Jesuit at that time, when the Order was beginning to struggle?

The Order was still holding together in most of the communities and schools when I was exploring, and it was only after I entered it that the struggles really began to progress. But the charism that St. Ignatius brought to the Church is, I think, for all the Church and for all time: “Do all for the greater glory of God,” total devotion to any mission given by the Holy Father. Defend and spread the Catholic faith. Do any kind of ministry: teaching, or missionary work, or science, or communication, or videos— even YouTube — anything that will help bring the Gospel to people and people to Christ.

Your first assignment was as a missionary in Samoa. How did that come about, and what was it like there?

Well, I had taught as a scholastic in Micronesia at Xavier High School in Truk in the Caroline Islands, and I really loved the mission work and the school there. The cardinal in Samoa, which is in Polynesia, was thinking of having the Jesuits make a foundation there. So I was sent in to “go try it out and see.” I spent two years there.

I really loved it, but then I went to Rome for studies, and what I found was that, in the mission lands today, they have plenty of vocations. The Church is growing; convents and seminaries are packed in Africa, India, Polynesia — but in America and Europe? We’re the new mission lands. So I wanted to talk to the students at your graduation about being local missionaries, reaching out here. This is more challenging. There’s more unbelief, more “nones,” and more hostility to our faith. It’s right here in our backyard.

What role do reverent liturgies and sacred music play in this mission work, in building up strong Catholic communities in our backyard?

The parishes with reverent liturgies and sacred music are the ones that thrive. People support those parishes. They drive across town to go to them.

In our cathedral we do a very beautiful liturgy. We have a full-time paid choir that does Palestrina and Mozart, and a concert organist who is the director of music. It’s an English Novus Ordo Mass, with the Kyrie and Gloria in Greek and Latin, plus a lot of Gregorian chant. But it shows that the Novus Ordo can be done reverently and well. You see the same at the National Shrine in Washington, D.C.; you see it at the Cathedral of St. Michael in Toronto; you see it at the Cathedral of the Madeleine in Salt Lake City; you see it at St. Paul’s in Boston, where they have the Boys’ Choir from Cambridge. You see it all around.

How did you come to be a commissioned officer in the U.S. Navy?

I was in the Navy for 27 years, 1991 to 2018. I joined it to be a modern missionary in our country, as I just said. It was 1991, during the First Gulf War. I was stationed in Rome as a student priest, doing my studies at the Gregorian, and they were looking for American priests in Rome to go down to Naples and say Mass for Catholic sailors on Navy warships that were on their way to the Middle East. The sailors would pick me up, drive me down, and I would say Mass for the ship’s company. When I left one ship, the captain said, “Father, next time you come, we’ve got to get you some gold stripes here to go on your sleeves,” meaning, “I hope you’ll sign up.”

So I talked to some Navy chaplains, and I felt moved by the Holy Spirit to ask my Jesuit superiors if they would allow me to join the Reserves, and they said yes. As a Navy chaplain you are a commissioned officer, and that gives you access to all the sailors and departments of a ship or base; you’re part of the commanding officer’s staff. You can go anywhere on the ship or on the Marine base, and you’re the chaplain for everyone in the command, not just Catholics.

The motto on your coat of arms is “God, the Father of Mercies.” Can you explain why you chose that and what it means?

Yes! “God, the Father of Mercies.” I chose it because for 12 years I was spiritual director in seminaries and was confessor to seminarians. So every day I would say the prayer of absolution, which begins, “God, the Father of Mercies, through the death and resurrection of His son …” Those are the last words I want to hear before I die, words that will help me more than anything else. So I choose them as my motto.

As Bishop of Oakland, you have prioritized bolstering the Catholic character in diocesan schools. What steps have you taken?

The first step is to evangelize the staff — principals and those who do the hiring — and then evangelize the teachers. So that’s a work in progress: to share my vision of Catholic education, what it means, and what the implications are. We have also revised our hiring contracts. That’s what drew TV cameras and stoked protests from certain families that didn’t appreciate the Catholic identity because they weren’t Catholic. But are our schools supposed to be non-denominational? Or are they supposed to be missions of the Church to hand on the Faith to the next generation?

And your answer is …

The Faith! I’m not interested in running a private prep school. And I tell that to the teachers: “If you don’t agree with the teachings of our faith, then this isn’t the place for you. Go teach at Sunnyside Public School or the charter school. But here, this school is an extension of the Catholic Church; it’s part of the Catholic Church. Your classroom is a pulpit, and the Supreme Court has defined teachers as “ministers of religion.”

That’s why I encouraged TAC’s graduates to please volunteer to teach catechism to our young people, especially for kids in parish First Communion and Confirmation classes. Otherwise you can’t complain at a cocktail party, “Oh, kids today don’t know the Faith. They don’t know what they’re doing when they come up for Holy Communion,” or, “Kids come for Confirmation, but they don’t know why,” or, “They’re wearing baseball hats in church.” Well, yes, kids do those things, because no one took the time to get in there and teach them the Faith. Or they had teachers who didn’t know the Faith. I’ve heard some college students complain that when they went to their parish for CCD, the lessons consisted of “Love God, draw a rainbow.” There was no content. Our religious-ed classes need to be more than a pizza and a movie.

Yes. I think it’s a great idea. It’s emphasizing something that really belongs to laypeople, and they can do it very well. It’s also a cry for help — “Please, come, get trained; we will help train you to hand on the Faith. Please come. Our young people need you.”

We have lots of training programs; every diocese does. There are two goals: teaching the content of the Faith and helping young people fall in love with Christ, to form a relationship with Him. Mind and heart are both important. We need to lead the students in both. I so believe in what you’re doing here at Thomas Aquinas College. Your graduates know the teachings of the Faith — and your graduates clearly have a loving relationship with the Lord. They are a real asset to the parishes they will live and worship in after graduation. What a pleasure it will be for a pastor to hear “Father, may I help teach First Communion or Confirmation?”