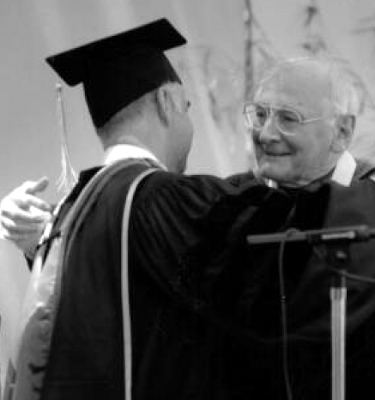 Thomas Aquinas College mourns the death of a dear friend who was one of its earliest and most generous benefactors, Sir Daniel J. Donohue, who died on December 3.

Sir Daniel, as friends affectionately called him, served for more than 40 years as president and chairman of the Dan Murphy Foundation in Los Angeles, which promotes the very best Catholic initiatives, especially those pertaining to education and religious life. Under Sir Daniel’s leadership, it has provided extensive support to inner-city Catholic high schools throughout the Archdiocese of Los Angeles, programs serving the poor, and the works of the Church Universal. It was instrumental in the construction of the Cathedral of Our Lady of the Angels as well as in the founding of both the Patrons of the Arts of the Vatican Museums and the Papal Foundation in Philadelphia.

For more than four decades the Foundation has also been steadfast in its support for the establishment of Thomas Aquinas College. “As president and chairman of the Dan Murphy Foundation, Sir Daniel was principally responsible for the Foundation’s generosity to the College,” says President Michael F. McLean. “The Foundation has generously supported our scholarship fund and contributed to the construction of many buildings, including St. Bernardine of Siena Library and Our Lady of the Most Holy Trinity Chapel.”

Born in 1919 in Newark, New Jersey, Sir Daniel attended Mount St. Mary’s College in Los Angeles and completed graduate work in political science and social welfare at The Catholic University of America in Washington, D.C., and at the University of Chicago. In 1954 he married Bernardine Murphy and, in 1957, became a founding trustee of the Dan Murphy Foundation, named in honor of his father-in-law.

For many years, Sir Daniel worked closely with the Holy See and with cardinals and bishops around the world. Three Holy Fathers — Pius XII, John XXIII, and Paul VI — honored him as Knight Commander of St. Gregory, Knight Grand Cross of the Equestrian Order of Holy Sepulchre, and Knight of the Sovereign Military Order of Malta. At the request of His Eminence, the late Timothy Cardinal Manning, Bl. Pope Paul VI named Sir Daniel a Gentleman in Waiting to His Holiness the Pope. He also conferred upon him the title, “Gentleman of His Holiness,” the highest award bestowed on a layman in the Church, and the first such Award ever given to an American.

The Dan Murphy Foundation’s annual gifts have been for many years a mainstay of the College’s financial aid program, and its Donohue Endowed Scholarship Fund more than sextupled the College’s endowment to provide scholarships in perpetuity for deserving students. The Foundation also provided lead gifts and leadership to spearhead the design and construction of the College’s library and Chapel. In 1993 the College awarded Sir Daniel its highest honor, the Saint Thomas Aquinas Medallion, and in 1999, it inducted the Dan Murphy Foundation into the Order of St. Albert the Great.

“Were it not for the unparalleled generosity of Sir Daniel and the Dan Murphy Foundation, Thomas Aquinas College simply would not exist, let alone thrive as it does today,” says Dr. McLean. “We thank God for this good man’s loyal commitment to our shared, noble endeavor to help build souls for Christ.”

Sir Daniel is survived by his sister, Rosemary E. Donohue, who is an emerita member of the College’s Board of Governors, and his nieces, Julie Donohue Schwartz and Rosemary Donohue. A Vigil Service and Holy Rosary for Sir Daniel will be held at the Cathedral of Our Lady of the Angels on Sunday, December 14, at 7:00 p.m. The funeral Mass will be offered at the Cathedral on Tuesday, December 16, at 10 a.m.

“We thank God for the life and work of Sir Daniel,” says Dr. McLean. “We encourage all to join us in praying for the repose of his soul.”