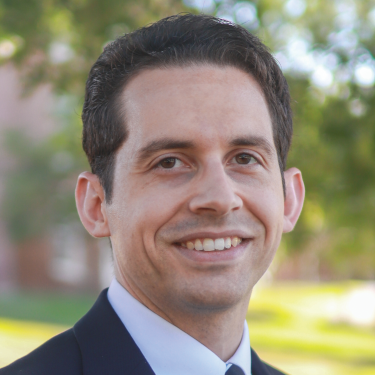 Even though he did not attend Thomas Aquinas College, Dr. Daniel Gutschke — a new tutor on the New England campus — has long had a fascination with it, thanks to an early encounter with founding president Dr. Ronald P. McArthur.

In the fall of 2007, when Dr. Gutschke was a senior at Christendom College, the school bestowed the Pro Deo et Patria Medal, its highest honor, on Dr. McArthur, Rev. Michael Scanlan, T.O.R. (the first chancellor of Franciscan University of Steubenville), and Dr. Warren H. Carroll (Christendom’s founding president). Dr. Gutschke was deeply moved at seeing these champions of Catholic liberal education onstage together. “I saw this event as a beautiful testimony to the fact that each of these colleges, with its own unique charism, was engaged in the same effort to renew Catholic higher education and form intelligent, faithful, and enthusiastic Catholics.”

During Dr. McArthur’s stay at Christendom, he offered a tutorial class like those at Thomas Aquinas College, giving Christendom students an experience of the unique variant of the Socratic Method that the College has developed. Dr. Gutschke participated in that tutorial and found the experience intriguing. “I appreciated the manner in which his carefully formulated questions helped students to understand and articulate the principal themes of the text under consideration,” he says. “Dr. McArthur’s approach demanded an active response on the part of students, helping them to appropriate the truths under consideration much more fully than if they had been merely passive.”

“Dr. McArthur’s approach demanded an active response on the part of students, helping them to appropriate the truths under consideration much more fully than if they had been merely passive.”

That exposure to the College left a lasting impression on the young scholar. “Having had such a positive experience of TAC,” Dr. Gutschke says, “I aspired to a life dedicated to the pursuit of wisdom as a member of the TAC community.”

Dr. Gutschke graduated from Christendom College in 2008 and went on to earn his Ph.D. from The Catholic University of America in 2018, simultaneously acquiring almost a decade of teaching experience. He taught courses at CUA before returning to Christendom in 2014, where he continued to teach while writing his dissertation.

During his eight years at Christendom, Dr. Gutschke taught introductory courses in philosophy for undergraduates, as well as more advanced courses in ethics, metaphysics, and modern philosophy. For his first year at Thomas Aquinas College, he is teaching Freshman Theology and Seminar, as well as Sophomore Language. “I am so excited to be reading with my students such Great Books as the Bible and The Iliad of Homer, and to be considering the beauty and nuance of the Latin language,” he says.