Last Friday afternoon students gathered in Our Mother of Perpetual Help Chapel (under construction) to consecrate themselves to St. Joseph. Rev. Greg Markey, chaplain on the New England campus, offered a short reflection, then anointed the hands of each person present with miraculous healing oil from St. Joseph’s Oratory in Montreal, before leading the congregation in the official words of consecration.

Members of the College community spent 33 days preparing for the event with the recently published Consecration to St. Joseph by Rev. Donald Calloway, MIC. Drawing from the writings of various saints and mystics, the work offers rich reflections on each title in the traditional litany to St. Joseph, teaching the reader about the Church’s Universal Patron along the way. “There are a lot of things I’d never known about St. Joseph that I now know,” says Rebecca Scheurer (’23). “I had thought of him, but not in the way that the Consecration is making me think of him, more like a father, more someone I can relate to.”

Especially fitting during this Year of St. Joseph — and in anticipation of the consecration in his honor — the Chapel recently acquired a beautiful statue of the saint which adorns the front of the sanctuary. Discovered in the closet of a nearby school, the statue stood in dire need of repair, and so Michelle Scheurer, mother of Rebecca, recast a missing portion of the effigy and delicately administered a new coat of paint. Less than a week after the statue arrived on campus, the Most Rev. William Byrne, Bishop of Springfield, Massachusetts, solemnly blessed it during his first visit to the College.

Fr. Markey is pleased to see an increased devotion on campus to the earthly father of Christ. “Devotion to St. Joseph is beautiful and worthy,” he asserts. “It should be a point of unity no matter where you stand on various issues in the Church.” He also believes that this devotion, in particular, is well-timed: “St. Joseph suffered for Christ, and I think if we are going to stand by Christ today and the truths of Christ, we are going to have to suffer. St. Joseph will defend us,” he concludes. “He will watch over us as he did with the Holy Family. … The family is under attack, and he is precisely the one to defend it, just like he defended Our Lady and Jesus.” 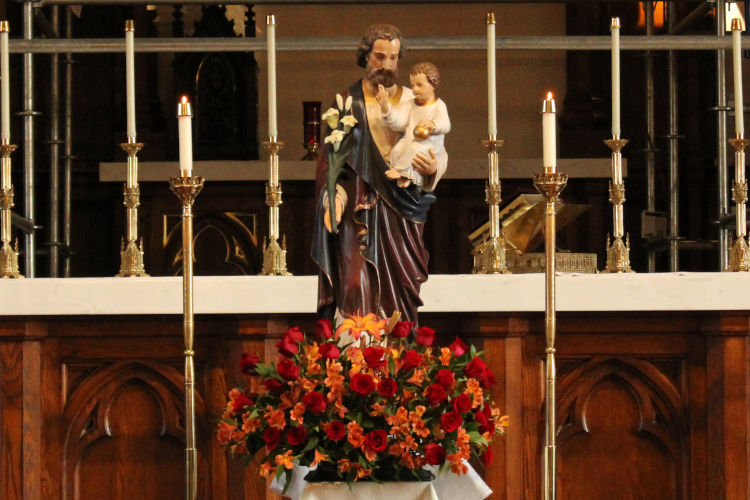