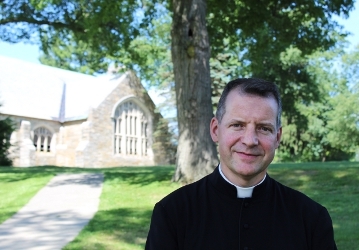 In preparation for the opening of its new campus in 2019, Thomas Aquinas College named its first New England chaplain: Rev. Greg Markey, then the parochial vicar of St. Lawrence Parish in Shelton, Connecticut.

A native of New England, Fr. Markey was raised in Connecticut and earned his bachelor’s degree in political science at the University of New Hampshire. Ordained to the priesthood for the Diocese of Bridgeport in 1999, he holds master’s degrees in divinity and moral theology from Mount St. Mary’s University in Emmitsburg, Maryland, and a licentiate in philosophy from The Catholic University of America.

“Thomas Aquinas College has a very good track record of offering an excellent education. I am grateful to be part of its coming to New England,” says Fr. Markey. “As a priest of 20 years who has taught in the seminary, I am hopeful that my experiences will help me to serve the College’s students and faculty well.”

Although “excited and enthusiastic” about coming to the College’s new campus, Fr. Markey admits that he was surprised to be named its first chaplain. “I didn’t seek this job, nor did I even apply for it,” he laughs. “The College found me.”

The story of how the College came to find this dynamic, faithful priest is yet one more example of the inestimable role of Providence in the formation of the New England campus.

From 2003 to 2015, Fr. Markey served as the pastor of St. Mary Church in Norwalk, Connecticut, during which time he led a high school program that was highly regarded throughout the region. “I started a youth group called Teen Catechism, where the kids would eat pizza and pray the Rosary, and then I would teach catechism for an hour and a half,” he recalls. “It doesn’t sound like a lot, but for whatever reason it was popular, drawing kids from outside our diocese. Every month some 60 to 70 kids would come.”

Among the high school students who traveled from afar were four of the children of Dr. Josef Froula, then a professor of philosophy at two New York seminaries. “My daughter Mary-Catherine describes the class as the highlight of her high school years,” he remembers. “When we discussed the class on the one-hour car ride home, I was always edified by even the secondhand accounts of Fr. Markey’s teaching. He patiently entertained a barrage of the most difficult questions that the students could come up with; the answers he gave were always the same or much better than the ones I could have given them.”

Dr. Froula joined the faculty of Thomas Aquinas College last fall, and he is one of the eight tutors who will comprise the founding faculty on the New England campus. When Dean John Goyette began looking for a priest to serve as the campus’ chaplain, Dr. Froula immediately thought of Fr. Markey. “Joe highly recommended him,” says Dr. Goyette, “so I reached out to see if he would be interested.”

Upon learning about the position, Fr. Markey was intrigued. “It sounded like a great fit,” he reflects. “Over the years, I have come to know many TAC families — parents, students, faculty, alumni, priests, benefactors — and I have always gotten along well with them, connected with them.” Still, he figured that the odds of his coming to Thomas Aquinas College were slim, as most bishops are understandably reluctant to part with their priests.

Yet when he sought the permission of the Most Rev. Frank J. Caggiano, Bishop of Bridgeport, Fr. Markey found that the unique circumstances of how he came to learn about the chaplain’s position would, in turn, make it possible for him to accept it. “The Bishop was very gracious,” he observes. “He asked me, ‘Were you searching for this position, did you apply for it?’ I said no. He then said, ‘So this just came to you out of the blue?’ I said yes. And he said, ‘Well, I think this is God’s providence, and you should go for it!’”

With His Excellency’s blessing, Fr. Markey arrived on the campus of Thomas Aquinas College, New England, in time for its first High School Summer Program. He is also the first priest to regularly serve in Our Mother of Perpetual Help Chapel.

“I think to be there on the ground level, when the new campus is just starting, is very exciting, and I look forward to it,” he says. “I want to help the students deepen their relationship with the Lord and prepare them, with all the spiritual and intellectual tools that they can get their hands on, for the highly secular world they will face upon graduation.”

As the first chaplain on the new campus, Fr. Markey helps to foster the customs, routines, and devotions that will shape campus life for many years to come. “Fr. Markey is an excellent chaplain for our New England campus,” says Dr. Goyette. “He celebrates the sacred liturgy in both the ordinary and extraordinary forms, has experience working with young adults, and has a real love for St. Thomas and the Catholic intellectual tradition.”

Adds Dr. Froula, “Like the curriculum at Thomas Aquinas College, Fr. Markey’s preaching has always been grounded in the Fathers and Doctors of the Church. We are blessed to have him as our chaplain.”