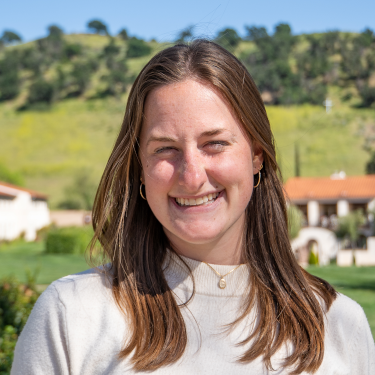 “I would get so discouraged in high school, being given just formulas with no explanation,” recalls Jo Dragoo, echoing a frustration that high school students often have with mathematics, as conventionally taught.

A rising senior at Thomas Aquinas College, Jo will join the ranks of prefects for the 2022 California High School Summer Program, which is a fitting choice. It was another Summer Program, some four years ago, which at last relieved her of that universal high school frustration.

In the daily readings and discussions on the Summer Program, Jo found herself grappling not with conclusions to be memorized, but life-altering questions to be asked, answered, and lived. “I thoroughly enjoyed those discussions and knew that I would grow so much intellectually here,” she recalls. “At TAC I would get my questions answered!”

The College’s synthesis of faith and reason also made an impression during her two-week exposure to campus life. “The Faith touched me so much during those two weeks,” she says. “I realized that if my faith could grow so much in only two weeks, there was no telling how much it could grow in four years!”

The Summer Program’s promise of the possibility of genuine intellectual fulfillment drew Jo to Thomas Aquinas College as she had never been drawn before. “My dad is a tutor at TAC, so the College has always been a part of my life,”  she says, explaining her initial reluctance to attend the College. “I thought I knew everything about it, since I had grown up as a ‘tutor-kid.’” It took experiencing the spiritual and intellectual life of the campus for her to realize that there was much more to Thomas Aquinas College than she had thought.

The 2022 Summer Program will be Jo’s third as a prefect, and her fourth program spent alongside her twin sister, Claire, who will also be a prefect. “I’m looking forward to sharing the place I call home with the attendees,” Jo reflects. “Campus is so peaceful, and the Holy Spirit is so present here. I find myself constantly transformed here, and I’m so excited to watch the students be transformed over the course of the two weeks.”