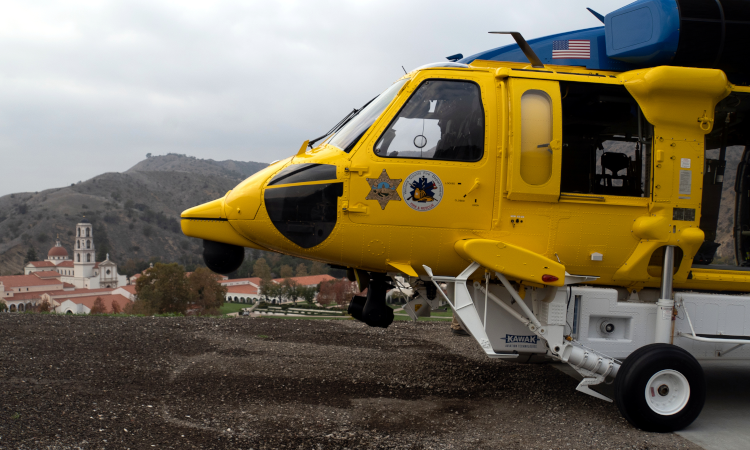 SANTA PAULA — A newly installed helispot on the campus of Thomas Aquinas College got its first use Tuesday afternoon as the Ventura County Fire Department (VCFD) trained a crew in advanced firefighting techniques using one of its recently purchased Sikorsky Firehawk helicopters.

“The new helispot at Thomas Aquinas College – less than a mile from where the 2017 Thomas Fire started — greatly aids our firefighting abilities in the Santa Paula area,” Fire Chief Mark Lorenzen said. “We no longer need to fly our helicopters to Fillmore to fill water tanks. That means we can put more water on a fire while it’s small, giving it less time to spread.”

In May, the Ventura County Aviation Unit, a joint operation of the County Sheriff’s Office and the VCFD, obtained two Firehawks, repurposed from the U.S. military for public-safety use. Each of the helicopters is equipped with a 1,000-gallon belly tank to drop water on fires, a rescue hoist, and night-vision technology.

“The Firehawks are a game-changer for our firefighting efforts,” Lorenzen said. “In the Santa Paula area, our challenge was finding a place to land and refill them. Today’s training exercises showed just how valuable this helispot will be for fighting wildfires.

For more than 40 years, the Aviation Unit landed its Vietnam-era “Huey” helicopters on Thomas Aquinas College’s athletic fields, an option which would not work for the much larger and heavier Firehawks.

“We had to find a new solution, and working with the VCFD, we were able to come up with one that will serve the people of Ventura County for many years to come,” said Mark Kretschmer, the college’s vice president for operations.

After considering various possibilities, county and college officials opted to install a concrete helispot, designed to accommodate the needs of a Firehawk helicopter and its crew, on the southeastern corner of the college’s Santa Paula campus. VCFD completed construction of the helispot this fall.

“We have a water line running alongside that hillside that is attached to 60,000 gallons of storage, so the Firehawks can quickly refill their tanks when battling blazes in the area,” added Kretschmer.

Connected by a service road to Highway 150, the site is easily accessible to ambulances and other rescue vehicles. “The helispot allows us to transfer a patient from a rescue helicopter to an ambulance, without causing any disruptions at Thomas Aquinas College,” Lorenzen said. “We are grateful to TAC for its assistance and the use of its campus.”

“We have been honored to work with VCFD ever since the college first came to Santa Paula in 1978, and we remember well the department’s heroic efforts during the Thomas Fire,” Kretschmer said. “We are delighted that, after assisting with Ventura County’s search-and-rescue operations for all these years, we can now contribute to its firefighting efforts as well.” 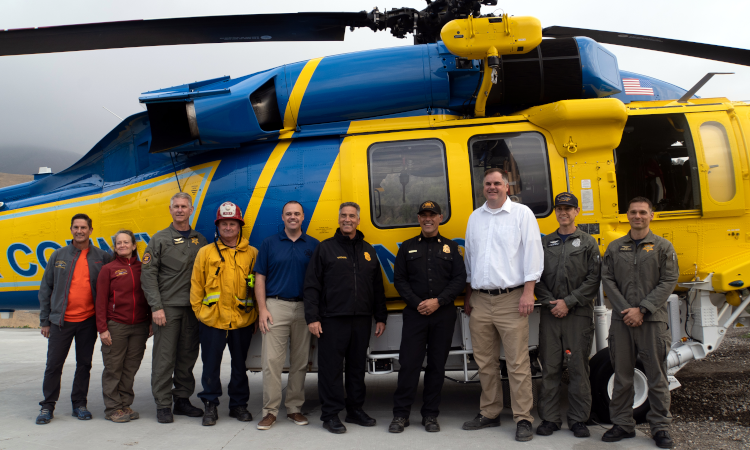 A four-year, co-educational institution with campuses in California and Massachusetts, Thomas Aquinas College has developed over the past 49 years a solid reputation for academic excellence in the United States and abroad. It is highly ranked by organizations such as The Princeton Review, U. S. News, and Kiplinger. At Thomas Aquinas College all students acquire a broad and fully integrated liberal education. The College offers one, four-year, classical curriculum that spans the major arts and sciences. Instead of reading textbooks, students read the original works of the greatest thinkers in Western civilization — the Great Books — in all the major disciplines: mathematics, natural science, literature, philosophy, and theology. The academic life of the college is conducted under the light of the Catholic faith and flourishes within a close-knit community, supported by a vibrant spiritual life. Graduates consistently excel in the many world-class institutions at which they pursue graduate degrees in fields such as law, medicine, business, theology and education. They have distinguished themselves serving as lawyers, doctors, business owners, priests, military service men and women, educators, journalists and college presidents. For additional information, visit www.thomasaquinas.edu.