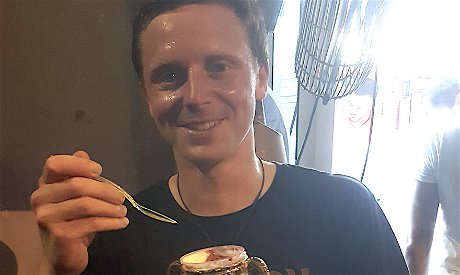 The photo features Michael Masteller (’13) enjoying the sweet taste of victory, delivered in the form of a cold cup of Italian gelato.

A seminarian for the Archdiocese of Los Angeles, Mr. Masteller is in the Eternal City as part of The Rome Experience, a six-week summer program run under the auspices of the Bishops Advisory Board that allows seminarians from throughout the U.S. to “pray and study in the heart of the Catholic Church, beside the Chair of St. Peter, and at the tombs of the saints and martyrs.” The program includes pilgrimages to several holy and historically significant sites, such as the Shrine of St. John Vianney in Ars, France; the major basilicas of Rome; and the Catacombs.

The Rome Experience also features an annual Circle the Vatican Race, in which the program’s director, Rev. Eric Nielsen of the Diocese of Madison, Wisconsin, challenges seminarians in a sprint along the arms of St. Peter’s Square. This year’s winner was none other than Mr. Masteller, who — in addition to receiving the prized cup of gelato — will have his name forever memorialized on a plaque listing the names of “Circle the Vatican” victors.

As part of the Rome Experience, Mr. Masteller and his fellow seminarians recently enjoyed a visit from an old friend of the College, His Eminence Raymond Cardinal Burke, patron of the Sovereign Military Order of Malta and the College’s 2010 Commencement Speaker: 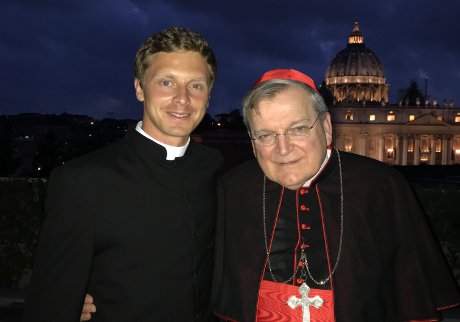 Michael Masteller (’13) with His Eminence Raymond Cardinal Burke, patron of the Sovereign Military Order of Malta

Please pray for Mr. Masteller and all of the College’s alumni seminarians!