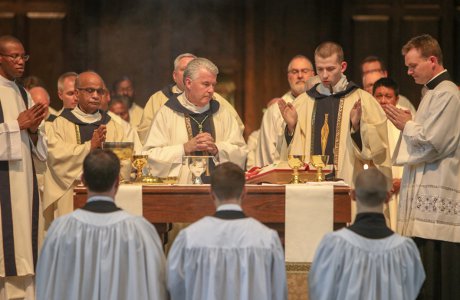 Upon receiving the Sacrament of Holy Orders at the hands of the Most Rev. William McGrattan, Bishop of Calgary, on June 29, Rev. Derek Remus (’11) became Thomas Aquinas College’s 72nd alumnus priest — and the first ordained for a Canadian diocese.

“It’s a sign of hope,” the new priest proclaims, not only because ordinations are a reflection of God’s care for His people, but because, in recent times, they have been all too rare in Canada. Fr. Remus is the first new priest to be ordained in his home diocese in three years.

“The Church in Canada has been in crisis for a long time,” he says. “Every single day I am confronted with the reality of people who have not had good catechesis and formation in the Faith for years, declining numbers at Mass, people who are influenced by relativism — and these are the Catholics!” Add to the mix the latest revelations of scandal and cover-up in the Church, and a new priest could understandably get discouraged — but not Fr. Remus.

“It’s a lot of work,” he says of his vocation. “But there’s a lot of joy and satisfaction in carrying out that work. There’s a sense of peace that comes from knowing you’re doing the will of God.”

“When I was 12, I was at a priestly ordination, and it was around then that the thought hit me,” Fr. Remus says. “‘This is what God wants me to do.’”

In his senior year of high school, he could not decide whether to enter the seminary right away, or if he should go to college first. A priest he knew proposed a compromise. “He advised me to go to college and get a degree in something that would be beneficial whether I went on to become a priest or not,” Fr. Remus recalls. That made the choice obvious: Thomas Aquinas College’s emphasis on philosophy and theology would be an excellent preparation for the seminary, but were he to choose another path, a liberal education would stand him in good stead professionally.

Looking back, Fr. Remus says, his time at the College was “the best four years of my life.” The reverent liturgies, the devout chaplains, and the like-minded, faithful friends all aided him in his discernment, as did the College’s classical curriculum. “Starting with the first semester of Freshman Year, reading and discussing Euclid, the Categories of Aristotle, and Sacred Scripture satisfied my natural desire to know,” he says. “And studying the highest truths — I think specifically of St. Thomas’ treatment of the priesthood of Christ — let me see what it means to be a priest.”

For the two years following his graduation, he worked as a tutor, paying off student loans, and then spent six months as a missionary in Peru. Around that time he also paid a visit to his alma mater for a conference on the social doctrine of the Church, where he received some encouraging words from his one-time tutor and mentor, the College’s founding president, Dr. Ronald P. McArthur.

“Dr. McArthur took me aside and said, ‘You can be a priest. You’ve got the qualities, and don’t let anybody stop you,’” recalls Fr. Remus. “His words remained with me throughout my time in the seminary. Whenever I was tempted to be discouraged or give up, they always came to mind.”

The education that Dr. McArthur and so many others had made possible likewise proved invaluable during Fr. Remus’ four years at St. Joseph’s Seminary in Edmonton. “I don’t know what would have happened if I hadn’t gone to Thomas Aquinas College,” he says. “The intellectual formation was critical; it allowed me to develop the ability to think logically, to follow through a logical argument, and thereby to make the most of my seminary education.”

The Good a Priest Can Do

His ordination this summer “was a time of great joy,” he says, but also “a humbling experience,” because “you sense the contrast between your own personal unworthiness and the dignity of the priestly office.” And just as his ordination was a “sign of hope” for the Church in a post-Christian culture, many more such signs have followed.

In his first assignment, Fr. Remus serves as the associate pastor at Holy Spirit Parish in Calgary. “Already, I have seen the good a priest can do,” he says. Among the faithful he has discovered a yearning for solid, even challenging, preaching. “One homily can do more good than one would think,” he observes, citing the testimonials of grateful parishioners.

Then there is the power of the sacraments in the lives of believers. “Saying Mass daily is something awesome — in the true sense of the word ‘awesome,’” says Fr. Remus. And the ability to absolve sins in the confessional is incomparable: “The reconciliation of even one sinner to God is of inestimable value, for, as St. Thomas said, the good of grace in one soul is greater than the good of nature in the whole universe.”