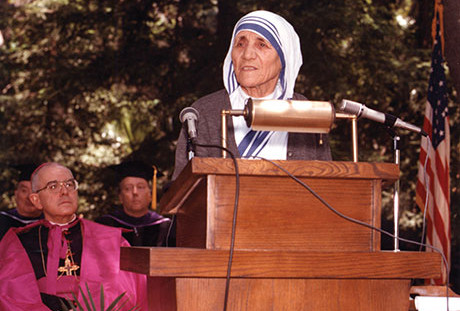 In anticipation of Friday’s March for Life in Washington, D.C., Sean Fitzpatrick (’02) has penned an article for Crisis about two women who loom large in America’s ongoing debate about the morality and legality of abortion — Bl. Mother Teresa and Hillary Rodham Clinton. Mother Teresa, who will be canonized this year, was an ardent defender of the unborn; Mrs. Clinton, who will likely be on November’s presidential ballot, is an unstinting champion of abortion “rights.” Yet few might remember that, nearly two decades ago, their paths crossed, and the soon-to-be saint had a notable influence on the would-be president.

Mr. Fitzpatrick recalls a poignant exchange between the two:

“Why do you think we haven’t had a woman as president yet?” First Lady Hillary Rodham Clinton asked her guest over their lunch at the White House.

The little woman sitting at table with Mrs. Clinton did not hesitate in her reply.

“Because she has probably been aborted,” said Mother Teresa.

Yet even though Mother Teresa was direct, even blunt, in her language, she had the insight and wisdom to find common ground where she and Mrs. Clinton could work together. Writes Mr. Fitzpatrick:

Although Hillary Clinton was, and remains, a supporter of legalized abortion, she agreed with Mother Teresa that adoption was a preferable alternative. Speaking to her afterwards, Mother Teresa told Mrs. Clinton of her desire to continue her mission to find homes and families for orphaned, abandoned, and unwanted children by founding an adoption center in Washington, D.C. .... Hillary Clinton did the necessary legwork and succeeded in opening The Mother Teresa Home for Infant Children in 1995 in an affluent section of Washington, D.C.

To appreciate fully the grace and influence of Mother Teresa, one must read Mr. Fitzpatrick’s fine article, Marching for Life, Mother Teresa, and Mrs. Clinton, in full. The headmaster of Gregory the Great Academy in Scranton, Pennsylvania, Mr. Fitzpatrick writes frequently for Crisis. This is the second year in a row that he has written an article pegged to the anniversary of Roe v. Wade. (See last year’s Funeral March for Life.) He concludes this year’s story on a hopeful, inspiring note:

This Friday, pro-life Americans march to … convert the hearts of those like Hillary Clinton. Mother Teresa would have Americans do no less. She herself showed us how to protest against abortion fearlessly. She herself marched peacefully but purposefully, to save the lives of children in any way she could. She shook the walls of the White House with her entreaties, and the Gates of Heaven with her prayers. The marchers in DC gather to rekindle the perfect and patient passion of Mother Teresa — a power that broke through, even to Hillary Rodham Clinton.

Members of the Thomas Aquinas College community will be participating in both this year’s March for Life in Washington, D.C., and the Walk for Life West Coast in San Francisco. Please join us!