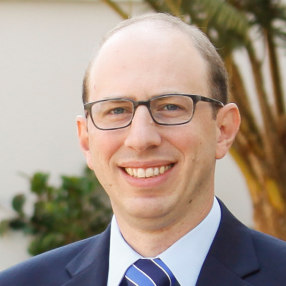 A native of Ohio, Dr. Drew Rosato studied philosophy and theology as an undergraduate at New York’s Fordham University. It was there that he “first had the opportunity to study the thought of St. Thomas Aquinas,” he says, giving rise to an intellectual curiosity that would eventually bring him to this college named for the Universal Doctor.

Upon graduating from Fordham, Dr. Rosato pursued graduate studies at the University of Notre Dame, where he earned a master’s in theology and a Ph.D. in medieval studies. There he made the acquaintance of his future wife, Jennifer, with whom he now has five children. He also met several graduates and others connected to Thomas Aquinas College, which led him to look into the College more deeply and, ultimately, inspired him to seek a position as a tutor.

“When I read the founding document of the College and came to understand its vision — and see that this vison took root in the way the school operated — that was very attractive,” he says. Having previously taught philosophy and theology at the College of Saint Mary Magdalen, the University of St. Thomas (Minnesota), and Mount St. Mary’s University, Dr. Rosato was also drawn by the prospect of teaching across the disciplines in the College’s classical curriculum. “The real coherence and integrity of the curriculum was a very big attraction for me,” he says.