The day after serving as keynote speaker at Thomas Aquinas College’s 50th Anniversary Gala, U.S. Supreme Court Justice Samuel A. Alito, Jr., and his wife, Martha-Ann, visited the College’s California campus. After attending Mass in Our Lady of the Most Holy Trinity Chapel and lunch with College officials and their spouses, the Justice participated in an hour-long town hall with President Michael F. McLean.

“How happy I am to be here,” reflected Justice Alito before an audience of some 400 students, faculty, and staff in St. Cecilia Lecture and Concert Hall. “I’ve enjoyed the opportunity to see this spectacular campus and attend the most beautiful Mass I have attended in years.” 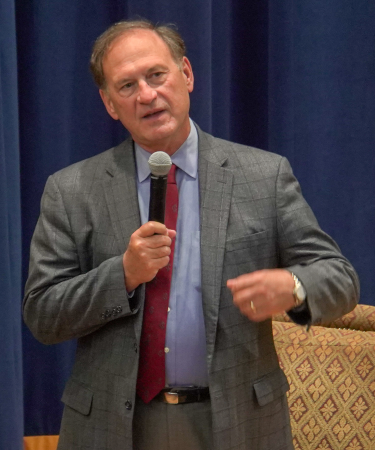 Over the course of the hour-long discussion, Dr. McLean asked the Justice about a wide range of topics, starting with how he would define his judicial philosophy, which he has described as “Practical Originalism.” Responding that he aims to “do Originalism the way Originalism should be done by a Supreme Court justice,” Justice Alito argued that the theory’s practical application differs from its academic definition.

“Originalism is the idea that the Constitution has a fixed meaning; it doesn’t change. It means what people would have understood it to mean at the time it was written,” Justice Alito observed. “Applying Originalism as a justice, however, means you take into account some practical realities,” such as stare decisis, or the power of precedent. “If you are a strict academic originalist, you don’t have to worry about precedent. You might consider it prudent to go back and reconsider past cases. But this is not practical for a Supreme Court Justice,” he continued, adding that he “almost always follow[s] past decisions.”

Although the discussion did not touch upon many individual Supreme Court cases, Justice Alito offered his insight on the Court’s decision in Obergefell v. Hodges (2015), which invoked the 14th Amendment to assert a constitutional right to same-sex marriage. “Liberty has meant a lot of different things to people throughout the ages; it is a very capacious term,” he remarked. “Whatever liberty means, though, in 1868 it did not mean the right to enter into a same-sex marriage. … Whatever you think about this, it’s not there in the 14th Amendment.”

Obergefell, he maintained, not only runs afoul of good jurisprudence, it establishes legal and cultural precedents that impinge on religious liberty. “That is what is happening. What we are seeing is that saying, ‘I cling to traditional values on marriage’ is not something you can say any more.”

Such intolerance is part of a growing trend of cultural hostility toward Christianity and its adherents, the Justice lamented. “There is a real movement to suppress the expression of anything that opposes the secular orthodoxy,” connected to a latent anti-Catholicism that has resurfaced at times throughout American history: “The charge against Catholics from the beginning is that Catholics have rigid beliefs and are controlled by the pope, that they’re going to do what the pope says instead of what’s right for the country.” This hostility grows greater as the country becomes increasingly secularized. “If the society doesn’t respect religion,” Justice Alito explained, “religious liberty becomes imperiled.”

Pride, he noted, is a constant danger for jurists, who sit on a tall bench, and who are accustomed to being called “your honor” and seeing people rise whenever they enter a room. “There’s a tremendous temptation to think you’re really a big deal and look down on other people,” he warned. Yet the Faith is a constant reminder that “we’re all made in the image and likeness of God and equal in the way that matters most.”

At the end of the conversation, Justice Alito shared his impressions of Thomas Aquinas College, revisiting some of the themes from his keynote address the night before. “An institution like this teaches students to think,” the Justice averred, suggesting that the College’s academic program prepares graduates well for legal careers. He also reiterated his admiration for TAC’s founders.

“It was really a bold move, and something that went against the cultural winds and the cultural tide, to found this college in the early 1970s,” Justice Alito said. “But it is consistent with the best of our civilization, the marriage of Athens and Jerusalem.” 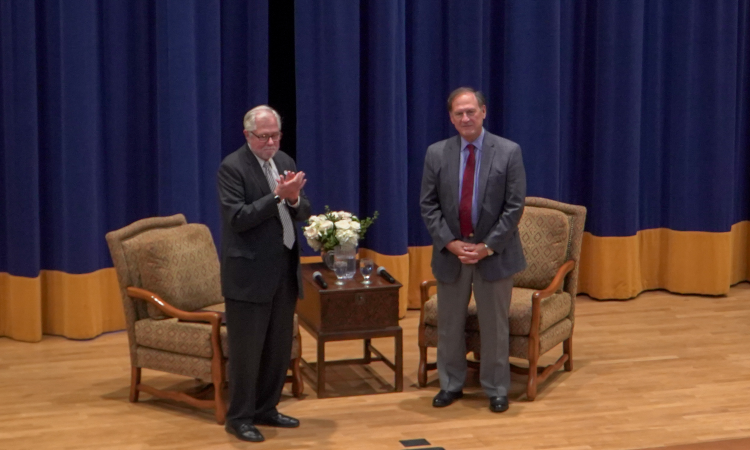