Throughout the spring semester, the sanctuary of Our Mother of Perpetual Help Chapel has transformed from a largely empty cavity into a stunning artistic masterpiece.

In late January, workers installed an ornate altar of repose and reredos in the upper sanctuary, bringing a focal point to the house of prayer and lifting one’s gaze towards heaven.  Only a few weeks later, towering scaffolding was erected in the sanctuary, and workers from Canning Ecclesiastical Painters began the work of decorating the space. Last week, the scaffolding was removed to reveal a remarkable sight. 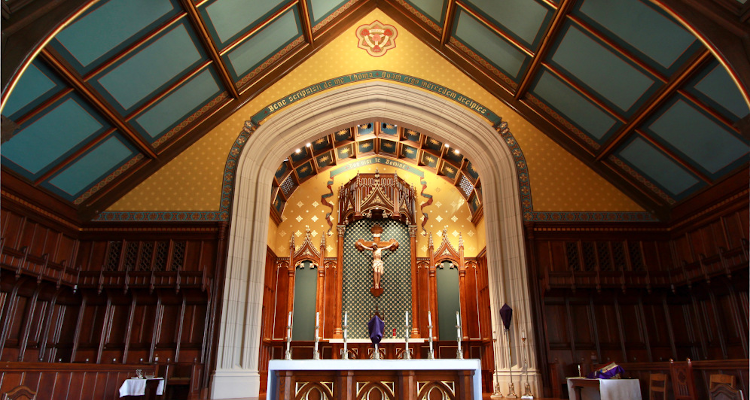 Emblazoned in Latin near the sanctuary’s summit is the question which Our Lord posed to St. Thomas Aquinas: “You have written well of me Thomas; what reward will you receive?” Above the tabernacle stands the Angelic Doctor’s reply: “Nothing except you, Lord.” A depiction of the Trinity graces the space above these inscriptions. Painters also added definition to the richly carved woodwork of the newly installed altar and reredos with ample linings of 23-karat gold. Various hues of blue and gold awash with stars serve as a pleasant backdrop to all of these new embellishments.

Above the tabernacle now hangs a large Gothic crucifix, soon to be flanked by carvings of the Blessed Mother and St. John the Beloved. On either side of this Crucifixion scene are two niches, in which workers will soon install statues of St. Thomas Aquinas, the venerable patron of the College, and St. John Henry Newman, a champion of Catholic liberal education.

“You make a church beautiful because it’s all for God’s greater glory,” says Rev. Greg Markey, chaplain of the College’s New England campus. “This is why God gave us artistry; this is why He gave us precious metals. … The Chapel is for His greater glory, and I think it’s worthy now of the Sacrifice of the Mass, which is the most important gift we have on this earth.”

Fr. Markey also believes that the magnificent work in the Chapel will convey a certain message to anyone on campus. “I think it communicates to people who see our campus that the Chapel is the most important building, that at Thomas Aquinas College, the Mass is the center of our life,” he says. “It shows that this is a College that takes its Catholic faith very seriously.”