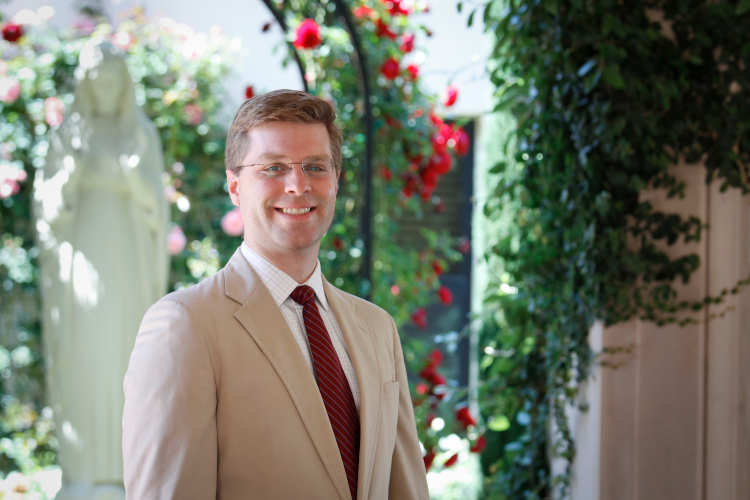 Thomas Aquinas College tutor David Grothoff — that is, Dr. David Grothoff — has successfully defended his doctoral dissertation at the Catholic University of America. His dissertation, “Aristotle on the Relation between Primary Matter and Extension,” was, he says, an effort “to restore the Aristotelian perspective of matter and extension, as contradistinguished from Descartes’ mathematization of nature.”

Before coming to Thomas Aquinas College as a student in 2003, Dr. Grothoff had already earned a bachelor’s degree in mechanical engineering at the University of Missouri, Columbia. Longing to gain a better understanding of how nature worked, and to what end, he had decided to pursue a second bachelor’s degree, this one in liberal arts. He graduated from the College in 2007, then earned a licentiate in philosophy at the Catholic University of America.

When Dr. Grothoff returned to Thomas Aquinas College in 2015, this time as a member of the teaching faculty, he had already completed his doctoral studies in philosophy, but not his dissertation. He therefore spent most of his vacation and free time over the last several years completing this requirement — a challenging task for a full-time college instructor who is also a husband and father with three young children at home.

His diligence, however, has paid off. He has now earned the title of “doctor.”

Below is the abbreviated summary of Dr. Grothoff’s dissertation:

For Aristotle, objects of physics can neither be nor be understood without matter and motion. For Descartes, corporeal substance is identified with extension, conceived as the object of geometry. In post-Cartesian physics, primary matter is typically forgotten along with the account of extension as fundamentally physical.

Aristotle identifies an enduring principle of substantial change, first matter, not itself actually this or that substance, but able to be any. However mysterious, this principle is inescapable if we recognize the reality of generation and death, nutrition, or the composition of substances from elements.

Unlike those who see first matter as spreading substances out toward non-being, Aristotle argues that first matter desires form, a participation in divine being.

In this light, extension is not the most fundamental characteristic of matter; rather, extension perfects matter insofar as it is ordered to attaining form. Coming to be simply requires accidental changes, all of which depend in a general way on things moving locally. Moving locally is not possible without a mobile with parts differing in position, and therefore extended. So material things are extended to fulfill matter’s desire for form, a humble way in which first matter, like all creation, stretches up toward God.