Our Lady of the Most Holy Trinity Chapel

At the head of the academic quadrangle on Thomas Aquinas College’s California campus stands its most prominent and important structure, Our Lady of the Most Holy Trinity Chapel. The fruit of a dozen years of planning, thousands of contributions from generous benefactors, and more than three years of construction, the Chapel was dedicated on the Feast of St, Thomas Aquinas, March 7, 2009 — the anniversary of which is observed as a solemnity on the California campus.

Our Lady of the Most Holy Trinity Chapel was designed by University of Notre Dame architect Duncan Stroik in collaboration with late Thomas Aquinas College president Thomas E. Dillon. Like the College’s classical curriculum, it is drawn from the greatest sources of the Western tradition. Its dome is representative of the College’s fidelity to Rome; its bell tower evokes California’s Mission history. Together, they announce the essential role of the Catholic faith in the life of the College.

Adorned with original statues, sacred artwork, and Biblical inscriptions, the Chapel is, as Dr. Dillon intended, a church that teaches. Through its every detail and its very design, which has garnered widespread acclaim, the building invites visitors to contemplate the greatest truths of the Faith.

The Chapel is named for Our Lady, our model in all human endeavors because of her unique relationship with the Persons of the Most Holy Trinity, the study of which is the culmination of students’ work at the College.

Our Mother of Perpetual Help Chapel 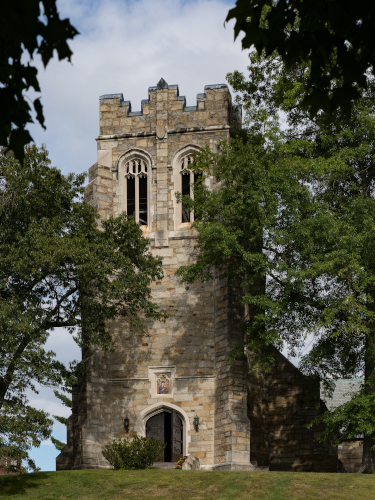 Constructed in 1909 on what was then the campus of the Northfield Seminary for Young Ladies, Thomas Aquinas College’s New England chapel was designed by the Boston firm of Shepley, Rutan, and Coolidge, architects of the original quadrangle at Stanford University, the Ames Building in Boston, and the Chicago Public Library. Built from Rockport granite, it is of the Gothic revival style in a variant known, fittingly, as Collegiate Gothic. Like its California counterpart, it is cruciform in shape, representing the Cross of Christ.

A gift of Margaret Olivia Sage, the Chapel was originally named for her late husband, Russell Sage, an American financier, railroad executive, and member of Congress. In 2019, just weeks before launching the campus’ inaugural year of classes, the College announced the building’s new name: Our Mother of Perpetual Help, in honor of Our Lady, who, through her intercession, has been a source of perpetual help to the College, particularly in the establishment of Thomas Aquinas College, New England.

While preserving the Chapel’s elegance and heritage, the College initiated a number of renovations to transform it for Catholic worship. Workers have installed a tabernacle, kneelers, a central aisle for liturgical processions, confessionals, a permanent altar and altar rail, Stations of the Cross, and a high altar and reredos. Just above the Chapel’s main entryway, ensconced in the masonry, now appears the likeness of Our Mother of Perpetual Help: a mosaic replica of a centuries-old icon associated with countless miracles.