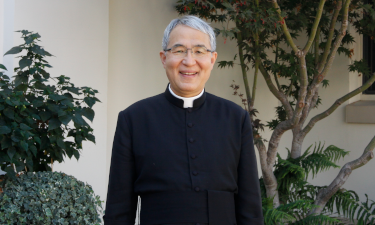 Rev. John Mary Chung grew up in a very close-knit family of five children in South Korea. He graduated from Kumho High School in Gwangju and then attended Seoul National University, where he received bachelor’s and master’s degrees in English education and English, respectively.

In 1986 Fr. Chung was baptized at the Cathedral of the Archdiocese of Seoul. He then obtained an instructor position at Korea National Open University, where for the next four years he taught various courses in English. To continue his studies, he came to the United States in 1991 to matriculate at the University of California, Berkeley, and earned a master’s and a doctorate in linguistics. From 1998 to 2006 he chaired the Korean program, teaching Korean language, culture, and literature, at Smith College.

While at Smith, Fr. Chung discerned his vocation to the priesthood. He furthered his discernment at Pope St. John XXIII National Seminary in Weston, Massachusetts, sponsored by the Archdiocese of San Francisco from 2006-2011. Fr. Chung was ordained a priest on June 25, 2011, by the Most Rev. George Niederauer, Archbishop of San Francisco.

Although his father passed away three years before Fr. Chung became Catholic in 1986, the priest’s mother converted from Buddhism to Catholicism three years before she died in 2006. Fr. Chung’s four siblings, spouses, and their children are all converts to the Catholic faith. They live in South Korea.