“A Return to Grace” reads the headline on the March 18, 2010, Wall Street Journal “Leisure & Arts” page. In the ensuing article, author Catesby Leigh heralds the work of University of Notre Dame architect Duncan Stroik, particularly Our Lady of the Most Holy Trinity Chapel at Thomas Aquinas College. 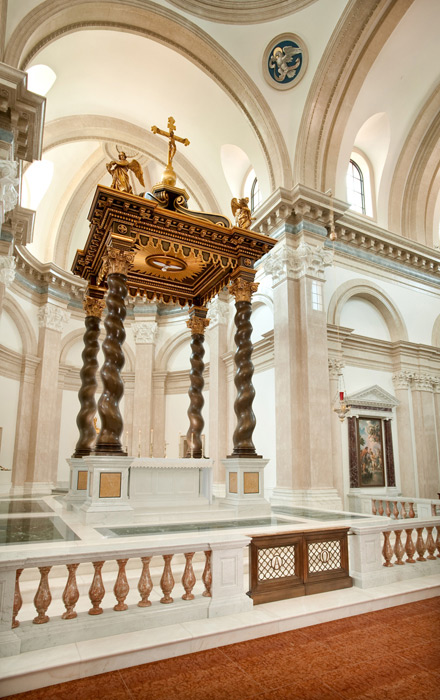 “Beautifully situated in the foothills of the Los Padres National Forest,” writes Mr. Leigh, the College’s chapel benefits “from its stylistic unity.” Inside the building, “the visitor experiences a harmonious fusion of Brunelleschi with Mission style,” as evidenced by “the exquisite profiles of the entablatures above the columns and pilasters arrayed throughout the chapel in major and minor orders.” Mr. Leigh singles out the “swirling bronze Solomonic columns and an exuberant superstructure” of the baldacchino, which were, he notes, “inspired by Bernini’s baldachin at St. Peter’s.”

That same day, New York Times columnist Ross Douthat noted the Journal story in his online blog, describing Leigh’s article as “a lovely piece.” Mr. Douthat additionally cited both the Chapel and the shrine as churches “that actually dare to look like churches.”

In 2011, Our Lady of the Most Holy Trinity Chapel’s architect, Duncan Stroik of the University of Notre Dame School of Architecture, won a Palladio Award, sponsored by Traditional Building and Period Homes magazines. Named for Andrea Palladio, a “Renaissance architect who created modern architecture for his time while drawing on past models for inspiration,” the award recognizes “outstanding work in traditional design.”

In 2016, the Institute of Classical Architecture & Art, which is dedicated to “advancing the classical tradition in architecture, urbanism, and their allied arts,” presented its prestigious Arthur Ross Award for Excellence in the Classical Tradition to Duncan G. Stroik, the design architect of Our Lady of the Most Holy Trinity Chapel. Established in 1982, the award is the longest-running prize given to classical architects in the United States. Its purpose is to “recognize and celebrate excellence in the classical tradition.” In honoring Mr. Stroik with an award “for lifetime achievement in architecture,” Mark Ferguson, director of the Institute’s board of directors, observed: “Duncan’s practice grew from a few unbuilt, published projects to commitments from patrons building for the ages and willing to commit to high-quality materials and workmanship in buildings dedicated to worship.”

Remarking on the Spanish Mission influence in the design of Our Lady of the Most Holy Trinity Chapel, Architect Magazine concluded in its December 2009 issue, “From the façades alone, covered in white cement stucco beneath terra-cotta tile roofs, the chapel might be a well-restored house of worship from California’s early days, but in higher style.” The magazine also featured a photographic slideshow on its website. “Our Lady of the Most Holy Trinity Chapel sits at the head of Thomas Aquinas College’s arcaded academic quadrangle,” reads one of the slideshow’s captions. “The symbolic placement, combined with the 135-foot bell tower’s stature as the tallest structure on campus, reinforces the church’s important role in college life.”

“After years in the faith-based travel industry,” writes by John Paul Sonnen in the Liturgical Arts Journal, “I can say without equivocation the chapel at Thomas Aquinas College (TAC) in Santa Paula, California is a must-see for Catholics.” A tour operator, history docent, and travel writer with Orbis Catholic Travel, Mr. Sonnen sings the praises both of the California campus’ chapel and the school it serves. “For those who do not know, TAC is the undisputed ‘rex’ of Catholic university-land in the area of liberal arts,” writes Mr. Sonnen. “What began as a little-known experiment in the world of Catholic higher education in 1971 has led to the college leading as a major force in United States Catholicism and the academic world at large.”

“The buildings that most Americans know best and cherish reflect the ideas and values of the classical tradition,” wrote architect and author Allan Greenberg in the Spring 2015 issue of City Journal. “And its revival is cause for celebration.” In a lengthy article, Mr. Greenberg noted that in the last decade there had been a “reemergence of architects who have studied classical architecture, and new classical buildings are once again being constructed.” He then cited four architects who are “leading representatives of this movement,” including Duncan Stroik, design architect of Our Lady of the Most Holy Trinity Chapel. The Chapel, Mr. Greenberg wrote, “establishes a classical architectural presence that enriches the entire campus [and] has become the center of campus life for this Catholic college, a welcoming place in which to pray or ponder the mysteries and challenges of life.”

Thomas Aquinas College’s president and communications manager appeared on the EWTN television network for the September 30, 2009, edition of “EWTN Live” with host Rev. Mitch Pacwa, S.J. The show highlighted Our Lady of the Most Holy Trinity Chapel, featuring video footage from the Dedication Masses in March and Pope Benedict XVI’s blessing of the Chapel cornerstone in 2008. Noting that many colleges “draw attention to themselves through their sports teams,” Fr. Pacwa credited Thomas Aquinas College with instead “doing it through orthodoxy in the classroom and in the new architecture visible on campus.”

Architect George C. Knight, Critic at the Yale School of Architecture, visited the campus and viewed the Chapel firsthand. In an article for Faith & Form, he wrote, “Throughout the chapel one sees examples of an architectural language commanded by a designer who can satisfy its rigor while offering delightful and meaningful spaces for its users. … (O)ne must see the Thomas Aquinas College chapel as a seminal achievement in the ever-nascent classical revival of the past few decades.”

In an extensive review of the Chapel for the Adoremus Bulletin, Dr. Denis McNamara, Assistant Director of the Liturgical Institute of Chicago, said that the building “cites the past and addresses the needs of its own time, all the while expressing the fundamentally heavenly origin of all church buildings as images of the Heavenly Jerusalem. Like the Mystical Body, the chapel brings together many things while remaining a unified whole conformed to Christ…. Simply put, no classical Catholic church building of this quality has been built since the Second Vatican Council, nor perhaps for decades before that. Now indeed we know: it can be done and done well. The chapel serves not only as a herald of the current state of architectural renewal, but challenges future architects to rise up to meet or exceed the standards at Thomas Aquinas College.” 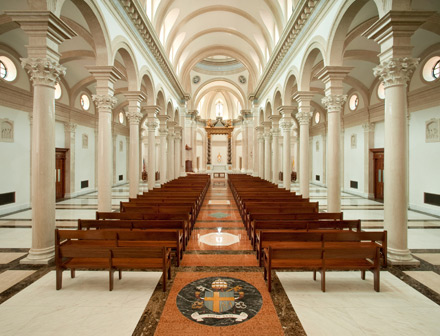 In the spring of 2010, Our Lady of the Most Holy Trinity Chapel garnered the recognition of the architectural and design industry when its design architect, Duncan G. Stroik, received a prestigious Tucker Design Award from the Building Stone Institute. Presented at a May 14 ceremony at Yale University, the biennial Tucker Awards honor those who have achieved excellence in concept, design, and construction through the incorporation of natural stone in building or landscape projects. According to the jurors who selected Mr. Stroik’s design for the award, Our Lady of the Most Holy Trinity Chapel is “a magnificent building that successfully blends many sources of architectural vocabulary. The detailing and material selections are amazing, particularly in the meticulous choice and use of stone types.”

The December 2009 issue of Traditional Building magazine includes an extensive profile of Our Lady of the Most Holy Trinity Chapel, describing both the various elements that make up the Chapel and the skilled craftsmanship necessary to produce them. “A new 15,000-sq.ft. chapel with a dome and a bell tower reaching 135 ft. into the sky now seems to grow out of the landscape in the hills about an hour out of Los Angeles,” the story begins. “It is the new centerpiece of the campus at Thomas Aquinas College.”

Our Lady of the Most Holy Trinity Chapel was included in California Catholic Daily’s recurring feature, “Churches Worth Driving To.” The profile lauded both the Chapel (for being “stunning in its beauty both inside and out”) as well as the College (for offering Masses that “are always beautiful and reverent”). The author further paid an indirect compliment to the College’s students, remarking that “the congregation is refreshingly reverent and attentive.”