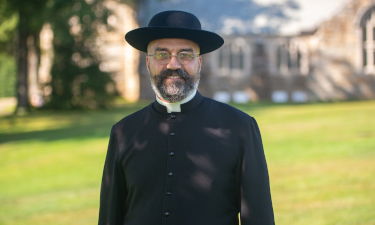 Born in Schenectady, New York, and raised in Wilmington, North Carolina, Rev. Carlos Viego is a priest of the Archdiocese of Newark. After graduating from Seton Hall University, he entered Mount St. Mary’s Seminary in Maryland and was ordained to the priesthood in 1998.

Between 1998 and 2020, Fr. Viego served as a parochial vicar at six parishes in the Archdiocese of Newark. His fluency in Spanish enabled him to minister in a special way to Hispanic members and groups such as the Legion of Mary in those parishes.

With an ear for languages, Fr. Viego is proficient in Italian, French, and German, and a working knowledge of Croatian, Polish, Russian, Arabic, and Hebrew. He is also accomplished in Latin, having studied in Rome with the late Carmelite priest and renowned Latin scholar Reggie Foster. Fr. Viego holds a licentiate in philosophy from The Catholic University of America and a doctorate in philosophy from Holy Cross Pontifical University in Rome.

“I accepted the chaplaincy at Thomas Aquinas College, New England, because the Catholic cultural mission of the College is also my own,” he says. “True education, culture, and civilization have their source and perfection in the Person of Christ, the incarnate Word of God, and in the historical reality of our Catholic culture.”

In his free time, Fr. Viego enjoys tennis and billiards, sunrises at the beach, listening to Gregorian chant, and playing the piano. In 2019, he started a podcast, Father Viego Homilies.