In The Greatest Battle, Christy (Tittmann ’89) Wall shares the hard-won spiritual fruit of confronting a child’s suffering. Franz Wall (’16) — an accomplished athlete, artist, and scholar — was severely injured in a skiing accident in November 2020. “For eight months I sat beside my son as he fought not only for life, but for a meaning to his new life,” writes Mrs. Wall.

They were not alone. Franz’s zest for life had won him many friends, and all were anxious to know how he was. Mrs. Wall resolved to keep them informed. “As I went through the horror of Franz’s accident, I intended at first to communicate via Facebook,” she says. “Not only updates on Franz’s condition, but to show my beloved agnostic friends how exactly we as Catholics look to our faith for strength and wisdom.”

At first Mrs. Wall wrote only periodic updates about Franz’s tenuous physical condition, but those updates began to resound with unexpected depth. “I knew neither the extent of Franz’s injury and the gut-wrenching agony we would be put through, nor could I have known the extent of people from all over the world who would be reading these updates,” she says. “Even more important, I did not know the depths of spiritual trial and consolation which we would experience. What started as a simple gesture to close friends turned into a really beautiful journey of love, faith, and prayer.”

As Mrs. Wall’s writing drew more friends and intercessors to Franz’s ongoing story, his condition improved. Readers heard about their friend’s admirable struggle to live, through his mother’s words, which left them uniquely inspired. “Many wrote to me, asking me to write a book,” recalls Mrs. Wall. But with frequent trips to the hospital and the unpredictable nature of Franz’s condition, such a project seemed impossible.

Eventually Franz’s condition stabilized, and he was able to leave the hospital for home. Readers, meanwhile, were still asking for the book — and what had seemed impossible now seemed feasible. “After Franz came home, and life grew quieter, Our Lord began to write the book in my head,” Mrs. Wall recalls. “It was the best I could do to get out of the way and write. By trial and error, I let the story come to my heart, and I wrote.” 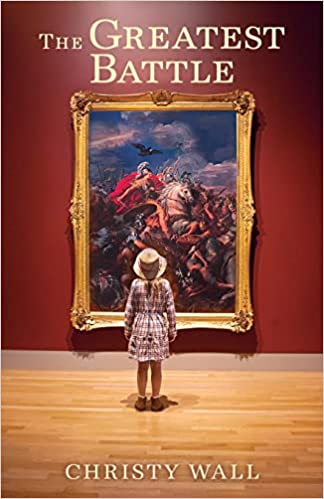 Thanks to the reliably candid criticism of her children, the book gradually took shape. “The hardest part was to recount the time in the hospital with Franz,” she says. “Many 3:00 a.m.’s, I sat huddled in my favorite bathrobe, sitting at the computer, shaking and crying as I relived my grief and worked to express it in a way that would speak to anyone reading it.”

The book, however, is more than a memoir of those days and nights spent at Franz’s hospital bed. For Mrs. Wall realized, reflecting on her life, that Providence had prepared her to shoulder the cross she now faced. “The Greatest Battle is a series of stories culminating in Franz’s accident,” she says. “Stories from the backstreets of Paris with a handsome boyfriend coming to the rescue. Stories about sailing a luxury yacht in high seas, a prophetic glittering dress of gold, and a wild horse who tamed the soul of a grieving mother.”

Thomas Aquinas College looms especially large in those memories. “There are stories about the wonderful people that embraced me as friends when I visited while in high school, and about the gallant men who helped me graduate; about finding my vocation, meeting my husband, and saving my soul,” she says. “It changed my life eternally. Without TAC I would have been lost.”

By God’s grace, both Franz and Mrs. Wall have won the meaning they sought in those dark days immediately after the hospital. Though still much in need of prayers, Franz has made tremendous strides toward healing; and for her part, Mrs. Wall has gained some insight into the mystery of pain. “My hope and prayer has been constant, to inflame readers with a love of God and, most importantly, to inspire them to trust God in the face of suffering and trial,” she reflects. “He has seared upon my soul to fight for the salvation of souls, and this has been a clear and fierce longing in my heart.”

With the release of The Greatest Battle, Mrs. Wall will ignite many more hearts with the same longing.