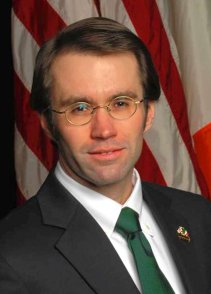 At its 113th Anniversary Dinner in March, held in celebration of St. Patrick’s Day, the Friendly Sons of St. Patrick of the Oranges named Michael D. Byrne (’04) its “Young Irishman of the Year.” The organization, which promotes Irish culture, education, and philanthropy, recognized Mr. Byrne for his longstanding service as chairman of New Jersey’s largest annual St. Patrick’s Day Parade. “My work with the St. Patrick’s Day Parade in Newark,” he said in his acceptance speech, flows from his Irish heritage. “The two have been closely interwoven for over 30 years.”

The chairman of the College’s New York City Board of Regents, Mr. Byrne is president of Pilgrim Strategies, LLC, a government, media, and community-relations consulting firm. Active in civic and political life, he is currently managing the campaign of Col. Rob Maness (USAF, ret.), a veteran of the wars in Afghanistan and Iraq who is running for the U.S. Senate in Louisiana. Mr. Byrne also managed the 2013 Senate campaign of Steve Lonegan in New Jersey, and he has worked for several conservative campaigns in Ohio, New Mexico, California, Minnesota, Wisconsin, and Massachusetts.

Key to his running of modern political campaigns, notes Mr. Byrne, is the classical education he received at the College. “The chronological study of philosophy — especially political philosophy — is invaluable in the political world, ” he says, “particularly with respect to development of policy, communications, and coalitions building.”