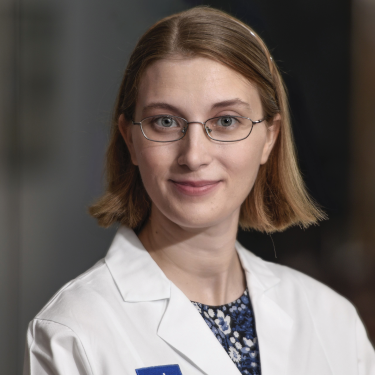 This past May, Dr. Cara Buskmiller (’11) finished not one, but two degrees: a fellowship in maternal-fetal medicine at the University of Texas in Houston, as well as a master’s in bioethics through the University of Mary in Bismarck, North Dakota. She now devotes her days to research and clinical practice, finding time to publish not only scientific papers but ethical analyses of often bewildering medical questions.

“I’ve wanted to be a physician since age four,” Dr. Buskmiller says, “but kids want to be many things at that age.” Yet that early spark of interest hadn’t sputtered by the time she entered high school, and she realized it was God keeping the flame alive. That led her to seriously consider medical school, which immediately posed a quandary: She wanted a school at the intersection of both authentic Catholicism and solid medical repute.

“I wanted a firm Catholic foundation to avoid the moral pitfalls doctors have to face,” says Dr. Buskmiller. “My first priority was a Catholic college that would help a Catholic doctor stay Catholic; a college that would give me a deeply knit love for the Faith. But there aren’t many Catholic colleges that are competitive in the medical field.” That didn’t stop her from looking: She would not sacrifice her priorities without a fight.

Around that time she came across an ad for Thomas Aquinas College in the National Catholic Register — an ad which included a picture of a stethoscope. “It turned out it had nothing to do with medicine,” laughs Dr. Buskmiller. But the ad served its purpose. She looked into the College and found herself admiring the Great Books, the integration of the curriculum, the Discussion Method, and above all the circumambience of the Catholic Faith.

But for all her admiration, she was not without misgivings. How would the Great Books prepare her for medical studies? That was when her father noticed that the College also offered a Summer Program for high school students. “He recommended that I at least look into that possibility,” she recalls.

Dr. Buskmiller attended the High School Summer Program in 2006 and found herself marveling at the snapshot of Thomas Aquinas College those two weeks afforded. “About halfway through I had a conversation with tutor Dr. Phillip Wodzinski, and he asked me, ‘You’re thinking of applying, right?’ And I said, ‘Oh, yes!’ I remember instantly thinking, ‘Shoot, why did I say that?’ But I was thinking of applying. I had come to see TAC as the solution to many problems I was facing.”

Dr. Buskmiller’s unyielding commitment to the priority of attending a doctrinally grounded and spiritually enriching Catholic college led her to TAC in 2007, and she has been grateful for both the theological and the philosophical foundations she received. But not all her problems were solved: She went through Thomas Aquinas College perpetually conscious of the prerequisites for medical school which the College, owing to its classical curriculum, could not supply. “I took my pre-med prereqs during the summers between my years at TAC,” she says. “I didn’t really get a break from school for four years!”

Although she could have undertaken a post-baccalaureate program after she graduated from the College, rather than filling her summers with highly technical study, she thought that would take too long. “I had a growing sense of urgency about getting into the medical field,” Dr. Buskmiller explains. She had noticed the increasing gulf between the secular medical consensus and the teachings of the Church, and she felt she could not wait.

That urgency even led her to reorient her Senior Thesis project. “I was going to write a beautiful thesis about Descartes’ mathematics, but I decided to use the thesis credit hours as chemistry hours, and wrote on chemistry instead. I’m very grateful to the tutors who were on my board!”

By her senior year, Dr. Buskmiller was prepared to present herself as a competitive applicant to medical schools — a demanding process at any time, but especially while writing a thesis and tackling some of the most difficult subjects in the curriculum. “The tutors started to joke about my absences, because I would leave most Fridays to visit different medical schools on the weekends,” she laughs.

“I wanted to do anti-abortion and fertility research, because a lack of supporting research in those areas is still a weak point in the pro-life movement.”

Medical School and Beyond

Her relentless work bore fruit when she was offered a spot at Texas A&M College of Medicine, which she saw as a gift from God. “It was the perfect place for me!” Not only would she be able to return to her home state of Texas, but A&M had a thriving Catholic student center. “I knew it would be a good place to make the transition out of TAC; I wouldn’t feel like I was out in the cold.” She declined two alternative offers and committed to A&M, and was able to graduate from Thomas Aquinas College with peace of mind in 2011. She was well on her way to being the physician she had dreamed of becoming at age four.

Of course, that way was neither short nor easy. Dr. Buskmiller graduated with her M.D. from Texas A&M in 2015, after which she decided to pursue advanced OB/GYN research during her residency. “I wanted to do anti-abortion and fertility research, because a lack of supporting research in those areas is still a weak point in the pro-life movement,” she says. This desire led her to an academic OB/GYN residency at Saint Louis University School of Medicine.

But Dr. Buskmiller’s 2015 was more than a professionally eventful year: Not long after she graduated from medical school, she fully embraced a vocation to consecrated virginity. “I felt certain that I had a call to become a physician, so I looked for ways that this part of God’s call would fit with my desire to be consecrated to Him. I briefly looked into a few religious orders, but focused on consecrated virginity in my sophomore year at the College because I believed it was the way in which I was made to become a saint.” After six years of formation with the Diocese of Dallas, she was consecrated in June 2015. Spiritually invigorated with the confidence of at last living out her vocation, Dr. Buskmiller made her way to St. Louis to begin her residency.

During her time at St. Louis University, and alongside her academic and medical duties, Dr. Buskmiller helped to found a nonprofit organization named Conscience in Residency. Doctors in many residency programs are expected, as a matter of professional course, to dispense contraceptives, recommend abortions, and perform or at least tacitly consent to other morally inadmissible medical practices. Aspiring doctors face a complex challenge if they want to dodge those compromising programs. “The organization helps Christians apply tactically to residencies, taking away some of the headache of trying to do all those tactics and strategy alone,” Dr. Buskmiller explains.

Graduating from Saint Louis University in 2019, she found her passion for research unabated, and began looking at research fellowships in the OB/GYN field, settling on one at the University of Texas in Houston. “Residency gives you your specialty, but a fellowship gives you a sub-specialty,” she explains. “My sub-specialty is maternal-fetal medicine, with a focus on high-risk pregnancies.” Given the profoundly complex ethical challenges she will encounter in her sub-specialty, Dr. Buskmiller additionally decided to pursue a master’s degree in bioethics, which, along with her fellowship, she completed this past spring.

Where does she get the drive to do so much? “I constantly think of the dream of St. Francis, when Christ told him, ‘Rebuild my church,’” laughs Dr. Buskmiller. “I find myself thinking, ‘rebuild? It’s collapsing around our ears, Lord!’” She admits happily that God’s grace, manifested in that sense of urgency and zeal for the Faith that drove her to complete the College’s rigorous classical curriculum plus her medical-school prerequisites in just four years, has sustained her through 11 more years of advanced medical study.

Grace, however, never precludes human effort. “For TAC students who are interested in medicine, both current and prospective, it’s important to plan ahead,” Dr. Buskmiller advises. “Planning ahead isn’t a failure to rely on God’s will; it’s conforming to God’s will if you are going into a technical field!” Always willing to lend a hand, she graciously provided a guide for medically minded students at the College who are pondering that path. “I want the College’s students to know,” she says, “that it’s possible to get into a very highly technical sub-specialty after TAC.”