Community Joins Together to Mourn, Pray for Marilyn McArthur 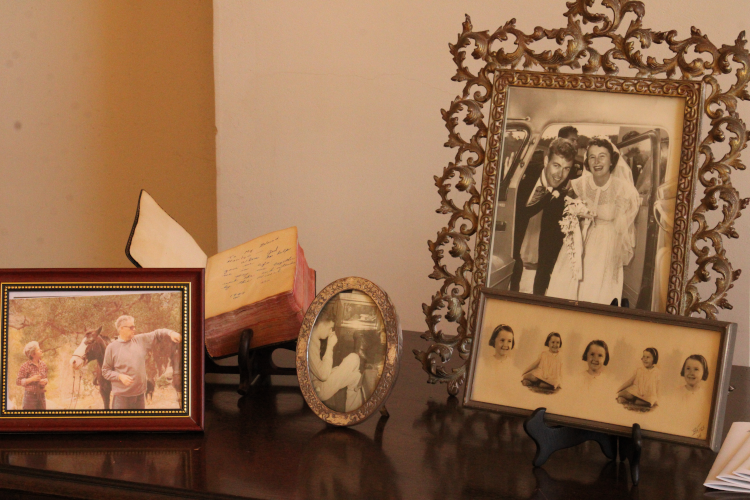 Friends and family came to the California campus on Saturday to mourn the passing of Marilyn McArthur, who was, in the words of President Paul J. O’Reilly, “the First Lady of Thomas Aquinas College.” The wife of the College’s late founding president, Dr. Ronald P. McArthur, she was, Dr. O’Reilly continued, “a devoted, faithful wife to Ron through all the phases of his life and the beloved matriarch of this community.”

The daylong remembrance began early in the morning with a viewing in Our Lady of the Most Holy Trinity Chapel. Candles marked the way to Mrs. McArthur’s casket, where mourners could look upon her face a final time. When they finished, the casket was draped in a black covering, and the congregation joined together to pray the Rosary for the repose of Mrs. McArthur’s soul

A procession of the celebrants, bedecked in black stoles and joined by student acolytes, then made its way to the altar. Alumnus priest Rev. Sebastian Walshe, O.Praem. (’94), offered the requiem Mass in the extraordinary form, joined at the altar by former and current chaplains Rev. Paul Raftery, O.P., and Rev. John Mary Chung. The Grimm family choir, conducted by Dan Grimm (’76), accompanied the Mass with soaring hymns, filling the Chapel’s high ceilings with song.

In his homily, Fr. Sebastian observed that, in the passing of loved ones, there is a temptation to strike out against God for letting someone so good die. “The truth is that no loving father is going to let his child suffer, unless it is the only way to bring about some greater good for that child,” he said. “We have to fall asleep to go home.”

Fr. Sebastian also reflected on Mrs. McArthur’s life of virtue and the good she did for the College, noting that “her children” are the members of the Thomas Aquinas College community. He added that it is thus our duty to pray for Mrs. McArthur, and that that was her final wish — to be prayed for, so that she may be joined with Our Lord and Dr. McArthur in Heaven.

As the Mass ended, the choir moved into Mozart’s Lacrimosa as the altar party took leave. Headed by the acolytes and celebrants, members of the congregation processed out to Santa Paula Cemetery, where Mrs. McArthur was laid to rest.

After the interment, the group gathered on campus once more for a luncheon in St. Joseph Commons, where friends were able to offer their memories and reflections about Mrs. McArthur. The College’s emeritus director of gift planning, Thomas Susanka, took to the podium first. “She gave herself unreservedly to God and to the presence of Christ in her life,” he said. “She lived every moment in preparation for God’s plan and lived faithfully to the end.”

Tutor Dr. John Nieto next recounted how Mrs. McArthur “didn’t fear anyone,” recalling the time St. Teresa of Calcutta visited the College. The Saint stayed in the Hacienda, and when Mrs. McArthur asked, “What would like for breakfast?”, she answered, “Oh, nothing for me.” To which Mrs. McArthur replied, “You’re my guest, you’re in my house, you’re gonna eat some breakfast. Now would you like one egg or two?” That was the Mrs. McArthur that Mr. Nieto knew. “She could talk to anyone, was always gracious, and always wanting to receive a guest. I will miss her for the rest of my life, and I commend her to your prayers.”

In his remarks, one of the College’s founders and former presidents, Peter L. DeLuca, spoke of Mrs. McArthur’s unfailing commitment to the College. “She was ready to put herself behind this project at any level,” he said. At the first campus, for example, she worked day and night to furnish the women’s residence hall to get it ready in time for the first academic year.

“I don’t think it’s hyperbole to say that, without Marilyn McArthur, there would not be Thomas Aquinas College,” said President O’Reilly as the luncheon came to an end. “We all owe her an extraordinary debt of gratitude, and the only way to repay that is to pray for the repose of her soul, and that of her companion, her longtime husband, Ron.”