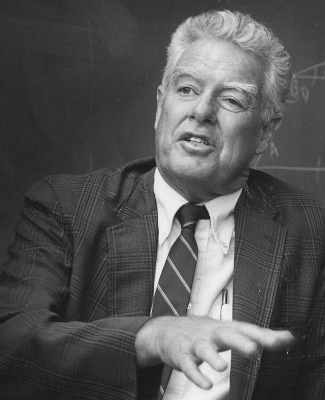 In 1970, Dr. Ronald P. McArthur made an enormous leap of faith. Leaving his home and a good job behind, he moved some 400 miles to become the founding president of Thomas Aquinas College — an institution which, at the time, had neither a campus, money, nor students. What it did have, however, was a promising vision, based on fidelity to the Church and a restoration of Catholic liberal education. That vision, sustained by Dr. McArthur’s deep faith, was more than enough to inspire what, to most, seemed his audacious gamble.

Four decades later, Thomas Aquinas College has lost the man who led it from its nascence to its firm establishment as an institution widely recognized for both its excellence and its faithfulness to the teaching Church. In the early hours of October 17, 2013, Dr. McArthur succumbed to renal disease at the age of 89.

“The entire Thomas Aquinas College community is united in prayer for Dr. McArthur,” said President Michael F. McLean. “Of course, we pray first for the repose of his soul and the consolation of his wife, Marilyn, but we also offer a deep, heartfelt prayer of thanksgiving. We thank God for blessing us with this good, holy man, who was our mentor, our colleague, our teacher, and our friend.”

From Private to Philosopher

Born and raised in the San Francisco Bay area, Dr. McArthur served in the Army, but did not see combat, during World War II. After his tour of service, he entered St. Mary’s College, Moraga (California), with plans to become a lawyer. Those plans derailed, however, when at St. Mary’s he read Plato’s Apology, Socrates’ unsuccessful but moving defense of himself against charges of treason and sedition. “It changed my mind,” he said. “I saw then that ideas were important.”

Ideas, then, became his life. Dr. McArthur finished at St. Mary’s with a Bachelor of Arts degree in 1949, and then attended Laval University in Quebec, where he studied under the famed Thomist Charles De Koninck. He obtained his doctorate in philosophy there in 1952, deeply committed to expounding and defending the teachings of Aristotle and St. Thomas.

The Genesis of a College

While at St. Mary’s, Dr. McArthur formed several close relationships with other philosophy teachers, Mark Berquist, Jack Neumayr, Frank Ellis, and Dick George. Moreover, he served as faculty advisor to a student organization of the Intercollegiate Studies Institute from 1961-63, whose representative, Peter DeLuca, had been a student of Dr. McArthur’s.

These six, plus another colleague (U.S. Army Lt. Colonel Bill Lawton, Jr.) whom Dr. McArthur met while teaching, were to become the nucleus of Thomas Aquinas College. They for some time had been discussing the plight of modern Catholic liberal education and how they might remedy it when friends and colleagues proposed that they found a college to implement their ideas.

Accordingly, during the summer of 1968, Dr. McArthur and Mr. Berquist began to put into writing a document that would reflect their vision of Catholic liberal education. Dr. Neumayr and another colleague from St. Mary’s, Br. Edmund Dolan, F.S.C, then made revisions to their draft. In 1969, they published A Proposal for the Fulfillment of Catholic Liberal Education, the founding document of Thomas Aquinas College.

The Presidency and Beyond

Dr. McArthur was named the College’s first president in 1970. By the sheer power of his convictions and personality, he attracted an impressive array of supporters and brought the College to life. He recruited faculty members and students, managed scarce funds, entertained guests, spoke at gatherings, courted benefactors, and taught courses all across the curriculum from freshmen through senior year. As the first lady of the fledgling College, Marilyn also offered heroic dedication to the enterprise, opening her home and heart to both guests and students.

As the years went on, Dr. McArthur began to see the fruit of his efforts in the lives of graduates and in their impact on the Church and society. And he saw the College grow in size and reputation. In 1991, after more than 20 years of devoted service to the College, he retired. Two years later, the Heritage Foundation awarded him the Salvatori Award for Academic Excellence in Education for “accomplishing the herculean task of founding a new private college in 1971, dedicated to the highest standards of teaching and leadership.” In 1996, he gave the Commencement address at the College and was awarded its highest honor, the Saint Thomas Aquinas Medallion.

In 2002 — to the great benefit of the whole community — Dr. McArthur returned to the College and its classrooms as a tutor. In addition to his teaching, he remained active in research and writing, lecturing and leading seminars around the country. Dr. McArthur also edited The Aquinas Review, a scholarly publication of Thomas Aquinas College. He continued on in this capacity until falling ill in 2011. With a heavy heart, he retired from teaching prior to the start of the 2012-13 academic year. In a letter to the College’s alumni, he wrote, “It has been my privilege over the years to have had something to do with your lives, and I pray God it has been good. I know it has been good for me, and can only hope the same for you.”

“It is beautiful to contemplate the many fruits of Dr. McArthur’s work,” said Dr. McLean. “How many people came to the College that he helped to found and, as a result, discovered the life of the mind, the gift of faith, or their vocations? How many people are now priests or religious, bringing grace to countless others? How many marriages, families, children, and grandchildren owe their very existence, in part, to the sacrifices he made? Already, we can see quite clearly the world of good Dr. McArthur achieved in his short time on this earth. May he rest in peace.”