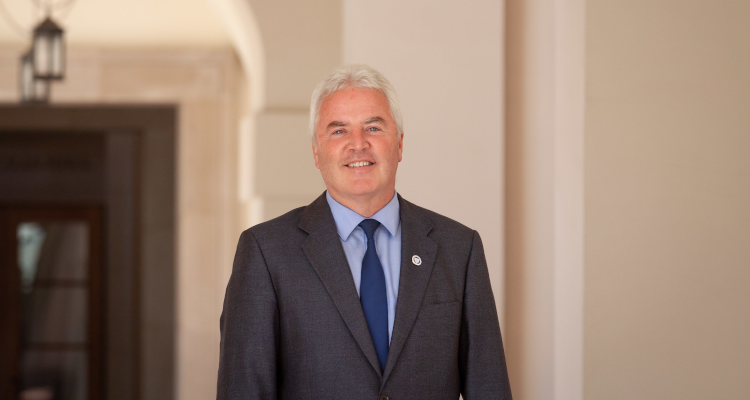 In a unanimous vote, the Board of Governors has appointed Dr. Paul J. O’Reilly (’84) as the next president of Thomas Aquinas College — the first alumnus to hold that position in the school’s 50-year history.

“We selected Paul to lead the many constituencies of the College due to his vision, enthusiasm, and experience,” says Scott Turicchi, chairman of the Board of Governors. “Given his varied talents and my interaction with him over many years, I have the utmost confidence in his ability to guide the College, and I look forward to collaborating with him.”

A 30-year member of the teaching faculty and the current vice president for advancement, Dr. O’Reilly first came to the College in 1980, shortly after his family fled to North America to escape the Troubles in Northern Ireland. “Thomas Aquinas College taught me the importance of clear thinking, confident reasoning, and commitment to truth,” he reflects. “Life in the TAC community also showed me the importance of a structured and principled way of living.”

Although he expected to pursue a career in business, the College’s program of Catholic liberal education drew him in a different direction. Within one year of his graduation, Dr. O’Reilly married classmate Peggy (Steichen ’84) and moved to Quebec, where he earned master’s and doctoral degrees in philosophy at the Université Laval. He then taught for two years at Saint Anselm College in Manchester, New Hampshire, before returning to Thomas Aquinas College as a member of the teaching faculty in 1989. From 1995 to 1999 he also served as assistant dean of students.

In 2011, President Michael F. McLean named Dr. O’Reilly vice president for development, a position he held until 2020, when he became vice president for advancement. “I have had the privilege of working closely with Paul for many years, most recently for the past 10 or so in his capacity as vice president,” says Dr. McLean. “I know him to be an excellent tutor, an effective fundraiser, and a man fully committed to the mission of Thomas Aquinas College. He has been a fine ambassador for the College, and he is highly regarded by our students and alumni.”

Among his accomplishments as vice president, Dr. O’Reilly helped to secure funding for the addition of three new buildings on the California campus: St. Gladys Hall, the St. Cecilia Lecture and Concert Hall, and the Pope St. John Paul II Athletic Center. He was also instrumental in obtaining the grant through which the College received its New England campus in 2017, and has since visited Northfield, Massachusetts, often to oversee the renovation of buildings and meet with faculty and benefactors.

“Paul has played a very significant role in our founding,” says Dr. Thomas J. Kaiser, dean of Thomas Aquinas College, New England. “If it hadn’t been for his enthusiasm and confidence in our ability to find benefactors and attract students, I don’t think we would have made the effort to establish the second campus. His foresight has proven true beyond what most of us would have imagined. I am confident that, under his leadership, both campuses will continue to flourish.”

On the West Coast, Dr. O’Reilly has been a key member of the campus community for more than three decades. “As a tutor, Paul has always been one of the best at leading seminars and class discussions, and he understands well the importance of maintaining our Catholic character and defending our religious liberty,” says Dr. John Goyette, dean of Thomas Aquinas College, California. “I have no doubt that, as president, he will continue to be tireless in his commitment to our mission of Catholic liberal education.”

In addition to being an alumnus of the College, Dr. O’Reilly is a TAC parent. He and Mrs. O’Reilly have 12 children, five of whom are current students or alumni, including a senior on the New England campus and a sophomore in California. “I intend to use my experience as an alumnus and a father of TAC students to ensure that the College will preserve its mission and the traditions that make it a place that gives rise to vocations, wholesome marriages, and remarkable young people who will transform this world,” he says.

Dr. O’Reilly will be the College’s fifth president, following Founding President Dr. Ronald P. McArthur (1971 – 1991), Dr. Thomas E. Dillon (1991 – 2009), Peter L. DeLuca (2009 – 2010), and Dr. McLean. He will not formally take office until July 1, 2022, and for the next year will transition into his new role alongside Dr. McLean, who intends to then return to the classroom. “I look forward to working closely with Paul during this period of transition,” says Dr. McLean. “I am confident that he will be an outstanding leader of the College.”

“As we enter into our 50th anniversary and we celebrate the growth of our New England campus, the future of TAC is promising,” says Dr. O’Reilly. “May God bless our efforts, and I ask for your prayers.”