Michael F. McLean to Step Down as President in 2022, Return Fulltime to Classroom 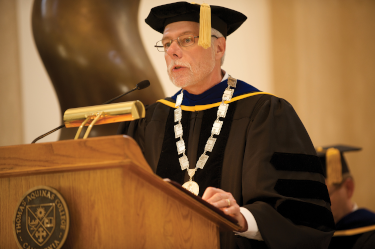 After 11 years as president of Thomas Aquinas College, Dr. Michael F. McLean has announced that he will retire in 2022, with plans to return fulltime to the classroom.

“I have been blessed to serve as president during a tremendous period in the history of the College, complete with hardships as well as triumphs,” says Dr. McLean. “After my second six-year term draws to a close, I would like to focus once more on what led me to become an educator and brought me to Thomas Aquinas College in the first place — and that is a love of teaching. I look forward to sitting at the classroom table and discussing the Great Books with our students, free from any administrative responsibilities.”

Dr. McLean assumed the presidency at a trying time for the College, shortly after the tragic death of President Thomas E. Dillon, who was killed in an automobile accident in 2009. As a longtime tutor, former dean, and onetime vice president for development, he was able to provide a much-needed sense of continuity and leadership, uniting the College’s faculty and Board of Governors to adapt to changing circumstances and press forward with the important work of Catholic liberal education.

During his presidency, Dr. McLean successfully led the College in a four-year legal effort that went all the way to the U.S. Supreme Court, securing an exemption from a federal mandate that compelled employers to provide free contraceptive, abortifacient, and sterilization coverage to their employees. He also saw the College through the 2017 Thomas Fire, memorably spending the night on the California campus even as flames swirled around it. And for the last year he has navigated the ever-changing regulatory landscape of COVID-19, enabling the College to remain in operation despite many challenges.

Meanwhile, Dr. McLean has overseen the completion of the California campus with the addition of St. Gladys Hall (classrooms), the St. Cecilia Lecture and Concert Hall, and the Pope St. John Paul II Athletic Center. In 2018, he facilitated the purchase of more than 700 acres on the surrounding Ferndale Ranch property, effectively expanding the size of the campus six-fold, and creating both a new buffer and student recreation areas.

Yet most notable of Dr. McLean’s accomplishments was the 2017 acquisition of a second campus — for free, thanks to the generosity of the National Christian Foundation — in Northfield, Massachusetts, and the launch of TAC, New England, in 2019.

“When Mike was elected president 11 years ago, life at TAC and in our culture was so much simpler,” says Chairman of the Board of Governors R. Scott Turicchi. “He has brought his great administrative skills to the challenges of fundraising, battling the federal government over the HHS mandate, overcoming natural disasters, and launching a second campus. On behalf of the board, we are very grateful for his friendship, service, and dedication to the College.”

“I am indebted to many people who have been of invaluable assistance to me and the College throughout my presidency,” says Dr. McLean. “First and foremost, to my wife, Lynda, but also to Peter DeLuca, who served as president between Tom Dillon’s death and my appointment; to Paul O’Reilly, our vice president for advancement, who was a driving force behind the expansion into New England; to Brian Kelly, John Goyette, and Tom Kaiser, who have served as deans; to Chairman Scott Turicchi and the entire Board of Governors; as well as to the faculty, staff, students, alumni, parents, and many benefactors of Thomas Aquinas College. It has been an honor to serve as president, and I look forward to continuing to serve the College in other ways moving forward.”