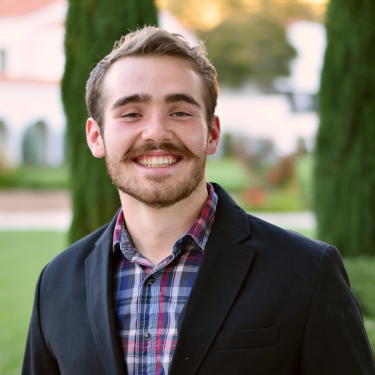 The next in our ongoing series about the prefects for this summer’s California High School Program is Jonathan Phelan (’23).

“I’m from Mesa, Arizona, a suburb of Phoenix,” Jonathan says, “and I first heard about Thomas Aquinas College from my high school football coach.” His coach, an alumnus, had only good things to say about his alma mater. Jonathan was intrigued, and his older brother Brendan enrolled in the Class of 2022.

The Summer Program was calling, and Jonathan was set to attend it in 2018, but not long before the Program began he tore his meniscus. “I had to get surgery,” he explains, “so I would have been on crutches during the entire Program and wouldn’t have been able to do a lot of the events.” With a heavy heart, he opted to convalesce at home.

Fortunately, Jonathan was well enough within a month or two to visit Brendan, who was beginning his freshman year. “That was really the deciding visit,” Jonathan says. “In high school, I had gotten a taste of liberal education, and I knew that I’d liked it and wanted to pursue it more.” He enrolled as a freshman in 2019 and has loved his time at the College ever since. “I thought I knew a lot in high school, but the more time you spend here, the more you realize how little you know,” he laughs, adding, “and that’s really fun!”

This will be Jonathan’s first time as a Summer Program prefect, and he’s excited that he will at last get to experience what he missed in 2018, especially the athletic events. “My body may be mostly made out of glass at this point, after all my injuries and surgeries,” he grins. “But I’m still always game for football, basketball — anything!” He will be a force to reckon with in the Prefect-Attendee basketball game, as well as a thoughtful partner in discussing the readings.

Entering his senior year, Jonathan has been giving his future some more serious thought, always attentive to the movements of Providence. “For the past two summers I’ve worked in New Mexico, building a Rosary walk and shrine out there,” he says. “That experience has really made me interested in beautiful architecture, especially sacred architecture.” Even so, he isn’t sure about his first steps post-graduation, but he’s not worried. “God’s got a plan,” he says with a smile.

God also has a plan for the 2022 Summer Program, and the College is blessed to have Jonathan aboard to bring that plan to fruition.