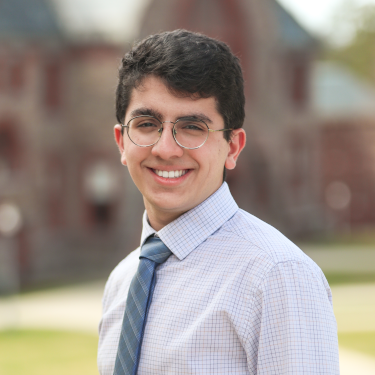 If attendees hear one of the prefects on the 2022 New England High School Summer Program speaking Portuguese, that would be rising sophomore Pedro Kair Medeiros da Silva, who comes to Thomas Aquinas College all the way from Florianopolis, in southern Brazil.

Pedro’s was a unique road to the College, and it started with his conversion to the Catholic faith. “After my conversion, I decided that I wanted to study God, to better understand Him and all His works,” he explains. “But as St. Thomas says, one doesn’t go directly to the sea; you have to start in the rivers.”

Pedro sought out the streams and rivers of education that would eventually flow into the theological studies he craved, and his search led him to the Institute of Hugh of St. Victor, an online Brazilian learning initiative. “I started to study with them, but that was not enough,” he says. “Talking with them, they told me that one of their former students was studying in probably the only place in the world that could give me the education that I wanted, and that was Thomas Aquinas College.” Pedro reached out to that former student, Jean Guerreiro (’22), who spoke of the College in glowing terms, prompting Pedro to apply.

Unsurpisingly, perhaps, Pedro has never attended the Summer Program. “I am really looking forward to it because I know how good TAC is, and how important this formation is for young people,” he says. “If only I had had this opprtunity when I was in high school, it would have really helped clarify my path and choices!”

In addition to being a prefect, Pedro is serious soccer player, “as a good Brazilian should be!” But beyond soccer, “I read poetry and study other languages, especially French.”

Pedro is a man of many loves, not least of which is Thomas Aquinas College: “Being able to show the attendees what the College is about, and maybe ignite in their hearts the desire to be a part of it, is a once-in-a-lifetime opportunity.”