The Father of Modern Chemistry: Why We Read Lavoisier

The following remarks are adapted from Dean John J. Goyette’s report to the Board of Governors at its May 11, 2018, meeting. They are part of an ongoing series of talks about why the College includes certain texts in its curriculum. 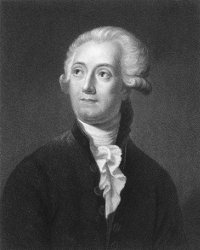 Antoine Lavoisier was an 18th century chemist whom we read in the Sophomore Natural Science tutorial. He is sometimes called “the father of modern chemistry,” and this is an accurate description. Lavoisier is to the science of chemistry what Newton is to physics.

Lavoisier is famous not only for his chemical theories but also for his work in the laboratory. Not only did he conduct his own experiments, but he manufactured most of his own scientific equipment; with the assistance of his wife, he produced exquisite drawings of this equipment so that both his results and the equipment he used to obtain them could be faithfully reproduced by other chemists.

He made a wealth of discoveries about various sorts of chemical combinations and reactions, notably the nature of combustion and the composition of water from hydrogen and oxygen. He also helped to revise the nomenclature used by chemists for chemical compounds and the elements from which they come. At the time of his death, he was at the height of his career, having recently published his monumental work, The Elements of Chemistry. Unfortunately for both him and us, because of his role in a financial company that collected taxes, he was a victim of the Reign of Terror during the French Revolution. So his very productive career was cut short — excuse the pun — by the guillotine.

Lavoisier pioneered the modern methods of chemical analysis, especially the careful measurement of the weights of reactants in and products of chemical combination. In the course of his experimental work, he anticipated the weight laws that led to the development of the atomic theory and ultimately to the periodic table of the elements. Lavoisier supplied repeated instances of what later chemists called the law of fixed proportions: that the elements in a chemical compound are in a fixed proportion by weight, regardless of how a compound is produced, whether by the forces of nature or synthesized in a lab.

Additionally, Lavoisier noted the capacity of several substances to combine with oxygen in greater and lesser ratios, and his analysis showed that the differing amounts of oxygen that combine with a given substance are in simple, whole-number ratios. That is, in effect, what chemists call the law of multiple proportions. This discovery is important for the science of chemistry because John Dalton would later argue that the whole-number ratios are best explained by positing atoms, that is, the elements combine in fixed units that remain undivided during chemical reaction.

Lavoisier is most famous for his argument that combustion is the result of a flammable substance combining with one of the gases in the atmosphere, which he named “oxygen.” Up until his time there were various theories about combustion. The most popular theory supposed that combustion is a kind of decomposition: When a substance is burned, it loses “phlogiston” (the essential fire material), which is meant to explain why burning substances give off heat and light. However, through some carefully designed experiments, Lavoisier successfully showed that when substances burn they gain weight, and the weight they gain is precisely equal to the weight lost by the surrounding air. 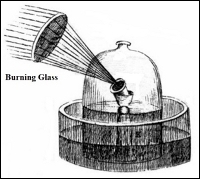 Some of his experiments were extremely clever, including one in which he used a burning glass (i.e., a large magnifying glass) to burn tin foil under a bell jar whose lower extremity was immersed in water, which served to confine the air under the jar (see diagram, right). This experiment served to show that the burning tin combined with a portion of the air contained under the jar. In a subsequent experiment he burned tin in a hermetically sealed glass vessel called a retort. This experiment enabled him to calculate precisely how much weight was gained by the burning tin, and showed that the weight gained could come only from the oxygen within the sealed vessel. After Lavoisier’s extensive experiments on combustion, the “phlogiston” theory lost its steam, and Lavoisier’s theory of combustion carried the day.

In another set of experiments, Lavoisier was able to show that water is a substance composed of oxygen and another more rarified gas that he called “hydrogen.” He succeeded in decomposing and synthesizing water in the laboratory and calculating the proportion by weight of hydrogen and oxygen. These experiments are significant because water was thought to be one of the elements — a simple substance — rather than a compound.

Indeed, whereas the ancients thought the number of elements is limited to only four, viz., earth, air, fire, and water, Lavoisier’s discoveries led him to conclude that there are many more elements — that there are dozens of distinct elementary metals and non-metals in the crust of the earth, that the air of our atmosphere is composed of several distinct gases, and that water is a compound rather than an element. Surprisingly, Lavoisier was of the opinion that fire is an element, although he was not of the opinion that it had negative weight (the view of those who espoused the phlogiston theory).

Reading Lavoisier in the Sophomore Natural Science course is a real delight because of the clarity of his thinking and expression, and because the detailed drawings and descriptions of his experiments are easy to follow. Readers can thus see and judge for themselves the arguments and experiments that help establish the atomic theory of matter. This material is obviously part of a liberal education because the liberally educated person is well-rounded, someone who can make educated judgments about all of the branches of learning, including natural science.

There is also a larger purpose to our study of thinkers such as Lavoisier. It is important for students to be able to think critically about the principles and presuppositions of modern natural science so that they can have an educated view of the conflict, or tension, between religion and science. Through the careful study of Lavoisier and other natural scientists, one can come to see that the widespread belief that faith and reason are contradictory is based not only on a distorted understanding of faith, but also on a superficial understanding of natural science.