The Virtues & Vices of Democracy: Why We Read Tocqueville

The following remarks are adapted from Dean John J. Goyette’s report to the Board of Governors at its February 20 2019, meeting. They are part of an ongoing series of talks about why the College includes certain texts in its curriculum. 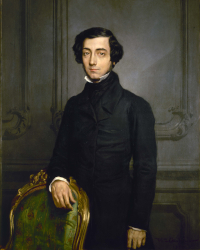 The best book on American democracy is written by a French nobleman, Alexis de Tocqueville. Democracy in America, Tocqueville’s most famous book, is a two-volume work spanning some 700 pages and covering nearly every aspect of American social and political life: the arrival of the Puritans; American laws and political institutions; the country’s habits, morals, and religious opinions; even its arts and sciences. The book’s principal focus is to identify the virtues and vices of democracy so that one might moderate its harmful tendencies.

Tocqueville was sent by the French government to America in 1831 in order to inspect the prison systems, but he used his nine-month trip as an occasion to study all aspects of American life. As a result of this careful study he published the first volume of Democracy in America in 1835, and the second five years later, in 1840.

The book begins by reflecting on a “democratic revolution” spreading across the globe, not so much a political revolution — a change in the form of government — but something he regards as more fundamental: a change in social conditions. Tocqueville points to a growing movement toward “equality of condition” that is slowly obliterating the distinction between social and political classes that characterized old feudal Europe, ushering in a new era of equality and democratic government.

Equality of condition has far-reaching consequences that are both political and social in nature. To adapt to the changing social and political landscape, Tocqueville conceives of a new science of politics that recognizes the growing importance of social conditions rather than focusing on forms of government. Indeed, Tocqueville is arguably the first to engage in what we now call “social science” as something distinct from “political science.” In any case, the object of Tocqueville’s new science is to see how the virtues of democracy can be strengthened and its vices tempered.

The Point of Departure

Tocqueville is generally more optimistic about the prospects of democracy in America as opposed to democracy in post-revolutionary France. This is largely due to American democracy’s point of departure: its Puritan origins. The Puritans combined two seemingly conflicting elements — the spirit of religion and the spirit of freedom. The spirit of religion safeguards morals by restricting freedom within relatively narrow bounds: true liberty, which is distinguished from the license to do whatever one wants, is exhibited especially in self-government. Moral restraint is thus combined with a democratic notion of political freedom.

This spirit of liberty, according to Tocqueville, is especially embodied in the New England township — a form of local government in which citizens of the town govern themselves by forming their own deliberative assembly. It is here that the citizens of America acquire the taste for political liberty and the habits of self-government. He goes to great lengths to extol the virtues of the New England township, which, he says, “forms the principle and the life of American freedom.”

Because of the importance of religion in fostering true liberty, Tocqueville also places tremendous emphasis upon the importance of the family in American democracy. This is because, in America, religion does not directly influence laws or political opinions; its influence is felt indirectly by regulating habits and customs within the family. And this is why Tocqueville attributes the singular excellence of American democracy to the role of American women within the home.

Whereas business and commercial interests preoccupy American men, religion captivates the hearts and minds of American women. Consequently, women shape morals; but they do so by remaining within the narrow circle of domestic life. Tocqueville stresses that although the Americans treat the sexes as morally and intellectually equal, they do not think they are alike: “They have thought that since nature had established such great variation between the physical and moral constitution of man and that of woman, its clearly indicated goal was to give a diverse employment to their different faculties.” American women seemingly play an inferior role in politics and society by remaining within the confines of the home, but they are the ones who shape the moral life of the republic.

Tyranny of the Majority

If Tocqueville is quick to point out the singular excellences of American democracy, he also identifies various threats to it. One of the principal dangers is what he calls the “tyranny of the majority,” which refers to the tendency of the majority to override, or suppress, the interests and opinions of the minority.

On the whole, Tocqueville is much less sanguine about the prospect of limiting the harmful effects of the tyranny of the majority by the legal and political safeguards proposed by the ancients or by our Founding Fathers. What Tocqueville sees is that elected representatives in America are not typically elected because of their virtue or wisdom. Except in times of national crisis, Americans tend to elect men of mediocre talent and virtue and elect their representatives not because they think them wiser or more virtuous, but because they mirror their own tastes and desires and will slavishly promote their own interests.

The tyranny of the majority can also be seen in ways that go beyond an elected majority trampling on the rights and interests of the minority. Tocqueville is concerned by a far more sinister tyranny exercised over thoughts and opinions. The great leveling brought about by the equality of condition makes ideas and opinions more uniform, and those who disagree with such opinions will feel isolated and afraid to speak, or even to think, in certain ways because of the influence of the majority. Political correctness is an example of the sort of danger that Tocqueville is talking about.

The love of equality is so strong that men will readily sacrifice their freedom to achieve equality. As Tocqueville puts it, democracy awakens “a depraved taste for equality in the human heart … that reduces men to preferring equality in servitude to inequality in freedom.” Indeed, Tocqueville accurately predicts the rise of a new kind of despotism:

I want to imagine with what new features despotism could be produced in the world: I see an innumerable crowd of like and equal men who revolve on themselves without repose, procuring the small and vulgar pleasures with which they fill their souls … Above these an immense tutelary power is elevated, which alone takes charge of assuring their enjoyments and watching over their fate. It is absolute, detailed, regular, far-seeing, and mild. It would resemble paternal power if, like that, it had for its object to prepare men for manhood; but on the contrary, it seeks only to keep them fixed irrevocably in childhood; it likes citizens to enjoy themselves provided that they think only of enjoying themselves. It willingly works for their happiness; but it wants to be the unique agent and sole arbiter of that; it provides for their security, foresees and secures their needs, facilitates their pleasures, conducts their principal affairs, directs their industry, regulates their estates, divides their inheritances; can it not take away from them entirely the trouble of thinking and the pain of living?

This is yet another instance of Tocqueville’s far-reaching mind. He does not use the term “Big Brother,” but it is the image that most readily comes to mind.

These few brief examples of Tocqueville’s genius can hardly do justice to a book that every educated person — certainly every educated American — should read at some time in his or her life. By reading Tocqueville, we are able to recognize the source of some of our own opinions and desires, see the inherent dangers of our democratic tendencies, and learn how to defend the spirit of liberty that animates what is best in American life.