Friendship and Our Common Humanity: Why We Read Adventures of Huckleberry Finn

Note: The following remarks are adapted from Dean John J. Goyette’s report to the Board of Governors at its November 14, 2020, meeting. They are part of an ongoing series of talks about why the College includes certain texts in its curriculum.

All of the books that we read in Thomas Aquinas College’s academic program are “great” either because of their own substantive merit or because their ideas and sentiments have been influential in shaping Western ideas and culture. Mark Twain’s Adventures of Huckleberry Finn deserves to be included for both of these reasons. We read it near the end of the first semester in the Senior Seminar, which mainly includes great works of the last couple hundred years, such as Tolstoy’s War and Peace, Adam Smith’s Wealth of Nations, and also works of Hegel, Marx, Jane Austen, Tocqueville, Dostoevsky, Freud, and Nietzsche.

As a young man, Mark Twain, born Samuel Clemens, worked as a steamboat pilot on the Mississippi River, until the Civil War put a stop to much of the river traffic. His pen name, which literally means “mark two,” is a phrase which indicated a safe depth for a steamboat. Twain had a deep love for the river: “The face of the water, in time, became a wonderful book — a book that was a dead language to the uneducated passenger, but which told its mind to me without reserve, delivering its most cherished secrets as clearly as if it uttered them with a voice. And it was not a book to be read once and thrown aside, for it had a new story to tell every day.” His description of the Mississippi River strongly suggests that his experience as a pilot on the Mississippi directly influenced his writing, especially Huckleberry Finn, which takes place primarily on the Mississippi River itself. Twain published Adventures of Huckleberry Finn in 1884.

One of the elements that characterizes a Great Book is that it engages in a great conversation over the centuries. Elements of the storyline in Huckleberry Finn are reminiscent not only of Homer’s poetry, but also the Bible, works of Shakespeare, and Miguel Cervantes’ Don Quixote. There are also subtle references throughout the story to a number of enduring conversations that span the centuries. Interestingly, although Huckleberry Finn is a novel, it has many elements in common with epic poetry. The story itself unifies the action of the “poem” in a way reminiscent of Homer’s Odyssey and Moses’ leading the slaves out of Egypt, as Huckleberry Finn, himself a runaway from a drunk and abusive father, helps Jim, a runaway slave, go down the Mississippi River. Many different episodes and different themes fit into the larger, overarching theme of the story.

The principal theme of Huckleberry Finn is Huck’s growing awareness, throughout his journey down the Mississippi, of his friendship and affection for Jim, and his consequent recognition of Jim’s humanity. This realization culminates in a crisis of conscience, wherein Huck pits his own love and friendship for Jim against what he thinks his conscience is telling him, a conscience which has been formed, or rather deformed, by a fundamentally unjust convention. Caught in the struggle between his own conscience, which is moved by natural law and ordinary human feeling, and a conventional morality that justifies slavery, Huck ultimately decides he is going to help Jim even if it means he will have to go to Hell.

The story also has themes contrasting nature and natural human society — symbolized by Huck and Jim’s life on the river — with civil society, which is characterized in the story by a veneer of manly virtue and Christian piety that covers an underlying current of widespread vice and hypocrisy. 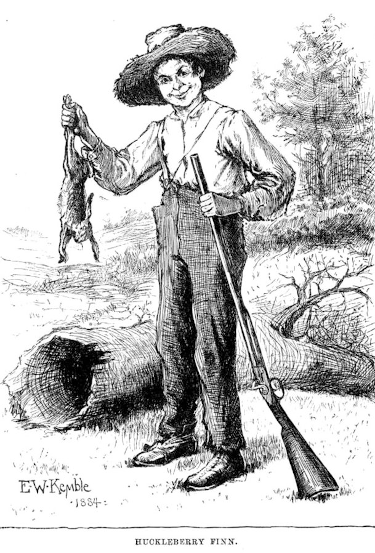 It is a book that is funny, poignant, and at times dark and gloomy. There are hilarious episodes such as the one where we see Huck dressed up as a girl, only to have his disguise discovered by his threading a needle in a way that a boy might do it, not as a girl would. Huck and Jim also have an amusing discussion about whether Solomon could truly be wise, having taken on 700 wives. Another chapter features a hilariously botched performance of Shakespeare, which jumbles together elements from several different plays and speeches and presents them all together as Hamlet’s soliloquy.

These humorous elements are interwoven with touching moments, such as when Jim describes missing his own children. He recollects mistreating his four-yearold daughter at one point, even striking her for disobedience — only to realize later that her deafness was the reason she had not heeded his command.

The book is also very dark. There is a long episode in the story about Huck staying with a family involved in a feud with another family going back for generations. He befriends a boy named Buck, and ends up seeing him killed with nearly his entire family. The violence of this wholesale slaughter also highlights the hypocrisy of the families involved, who love to listen to sermons on brotherly love. Another shocking episode involves the cruelty and violence of a mob toward a couple of con men in revenge for having been deceived. Though the pair of con artists certainly deserves some sort of justice, Huck is horrified to see them tarred and feathered.

Given the book’s underlying and deep-seated criticism of slavery, it is surprising that Huckleberry Finn often comes under attack because its characters regularly use a racially charged epithet, namely, the n-word. But Twain uses this term to help manifest the jarring contrast between the humanity of Jim and the unjust convention of slavery. In fact, the book is so striking because it presents an honest and reflective consideration of our own problems as a nation and as human beings. The Adventures of Huckleberry Finn is unquestionably one of the great American novels. It grapples directly with the problem of slavery, which has arguably been the fundamental issue facing our nation from the beginning, one that Tocqueville observed during his visit to America in 1831 and astutely identified as an underlying flaw and contradiction. It is a problem that has involved the whole republic and its effects are still felt today.

Moreover, Huckleberry Finn does not merely manifest the problem of slavery. It points to a solution. The friendship between Huck and Jim is one of the most moving in all of literature. Not only does it testify to the common humanity of the black man — and the horrific injustice of slavery — it also gives us hope that whites and blacks can be united in friendship and that the wounds of the nation might be healed.