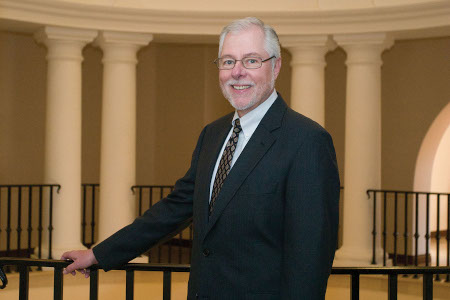 n February 13, 2010, more than 650 faculty, staff, students, alumni, and friends of Thomas Aquinas College gathered in Our Lady of the Most Holy Trinity Chapel as the College inaugurated Dr. Michael F. McLean as its fourth president — an office he would hold for the next 12 years.

Dr. McLean joined the Thomas Aquinas College faculty in 1978 after completing his coursework for a doctorate in philosophy at the University of Notre Dame. Previously he served in the U.S. Peace Corps and the U.S. Coast Guard. He earned his bachelor’s degree in philosophy at Saint Mary’s College of California, where he was a student of Thomas Aquinas College’s founding president, Dr. Ronald P. McArthur, and a classmate of late president Dr. Thomas E. Dillon. President McLean succeeded co-founder and interim president Peter L. DeLuca, who took office in April, 2009, after Dr. Dillon was tragically killed in an automobile accident in Ireland.

Over the course of more than 30 years at the College, Dr. McLean has served as assistant dean for student affairs, vice president for development and, from 2003 to 2010, dean of the College. “Michael McLean has been a superior teacher, a superior dean, and a successful vice president for development,” remarked Dr. McArthur. “He is, therefore, not only qualified but competent and capable of the highest kind of leadership for the College today.”

An enthusiastic hiker, gardener, and lover of music, Dr. McLean is a longtime champion of Catholic liberal education. He is the co-founder of the Great Books Seminars in Ojai, Calif., and a former president of the board of directors of St. Augustine Academy in Ventura. He and his wife, Lynda, are the parents of three children and the grandparents of four.

“Helping our students acquire the intellectual and moral virtues, increasing their knowledge and love of God, and fitting them for lives of service … is the work of Thomas Aquinas College,” said Dr. McLean in his inaugural address. “Of the importance of this work there can be no doubt, especially in a world where so many have abandoned the pursuit of truth … a world very much in need of the light and love of Christ.”