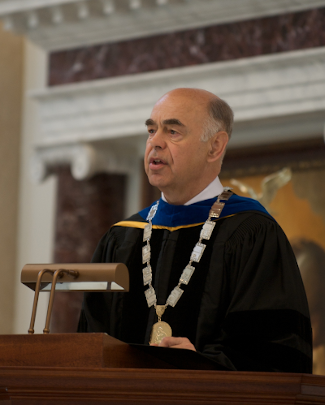 For many at Thomas Aquinas College, the news first came by way of the grand bells that rang out from the three-tiered bell tower of Our Lady of the Most Holy Trinity Chapel, the glorious new House of God that Dr. Thomas E. Dillon spent years laboring to make a reality. The bells’ solemn tones reverberated across the academic quadrangle on the afternoon of Easter Wednesday, 2009, summoning all to the Chapel.

Inside, Dean Michael F. McLean delivered the somber news: While en route to the International Council of the Universities of St. Thomas Aquinas in Limerick, Ireland, Dr. Dillon’s car ran off the road, injuring his wife of 42 years, Terri, and leaving dead the man who had tirelessly served Thomas Aquinas College as president since 1991. Students, faculty, and staff sat in stunned silence, shocked that the cheerful, energetic presence who had long delighted them with his friendly, thoughtful ways was gone.

Lost on no one present was that Dr. Dillon had died as he had lived — in the faithful service of Thomas Aquinas College. He was in Ireland for an important conference, with plans to continue on to Rome, where he was to have met with numerous Church officials as part of his ongoing effort to cultivate support for the College.

This is the life Dr. Dillon embraced, dutifully and joyfully, often traveling, always seeking new friendships for the College and maintaining old ones. “The downside of living in this beautiful house,” he often joked about the Doheny Hacienda, the official residence of the College president, “is that I never get to be here.”

For a devoted husband, father of four, and grandfather of 15, this demanding schedule required great personal sacrifice. But God called Tom Dillon to the cause of Catholic education, and he answered that call resoundingly, teaching a sophomore seminar each year in addition to his myriad administrative duties.

Over the course of his tenure, Dr. Dillon labored to secure the College’s financial well-being, raising some $100 million and building nine new structures, including the library, the laboratory building, five residence halls, the faculty and administration building, and, of course, Our Lady of the Most Holy Trinity Chapel. He also worked to strengthen the faculty, and with his fellow tutors refined the academic program, reaffirming the College’s commitment to classical liberal education and its discipleship to St. Thomas. All the while, his uppermost priority was to preserve Thomas Aquinas College’s fidelity to the Magisterium of the Catholic Church.

Under Dr. Dillon’s leadership, enrollment at the College increased from 198 students to the maximum capacity of 350, and the number of teaching faculty doubled from 18 to 36. Meanwhile, the College achieved a national reputation for excellence, reflected in its rankings in both Catholic and secular college guides.

Dr. Dillon held a bachelor of arts degree in integral liberal arts from St. Mary’s College of California and master’s and doctoral degrees in philosophy from the University of Notre Dame. He first came to the College as a member of the teaching faculty in 1972, one year after its founding. From 1976 to 1981, he served as assistant dean for student affairs, and then as academic dean from 1981 until his first appointment as president in 1991.

Widely recognized as a national leader in the reform of accreditation in higher education, Dr. Dillon was active in the early 1990s in organizing a new national accrediting agency, the American Academy for Liberal Education. In 2003 the United States Secretary of Education appointed him to a three-year term on the 15-member National Advisory Committee on Institutional Quality and Integrity, a group that, in effect, accredits the accreditors. In the late 1990s, the United States Congress appointed him to two consecutive three-year terms on the 11-member national Advisory Committee on Student Financial Assistance, which advises Congress and the Secretary of Education on the disposition of over $60 billion in financial aid annually.

“The loss of such a fine figure, emblematic of the good work done at Thomas Aquinas College, leaves a gap in the life of any institution — and more so when it is a figure of such stature and history,” wrote Zenon Cardinal Grocholewski, Prefect for the Congregation for Catholic Education, upon receiving the news of Dr. Dillon’s death in 2009. “Truly, Dr. Dillon was the face of your College, steeped in Catholic tradition and in academic excellence.”