After the installation of four saintly statutes and completion of the sanctuary in Our Mother of Perpetual Help Chapel last May, minor renovations continued throughout this past semester. By the time students departed the New England campus for Christmas vacation, they could see the fruits of behind-the-scenes work in the sacristies, as well as the completion of the Chapel’s shrine to Our Mother Perpetual Help and new ornamentation in the building’s ceiling. 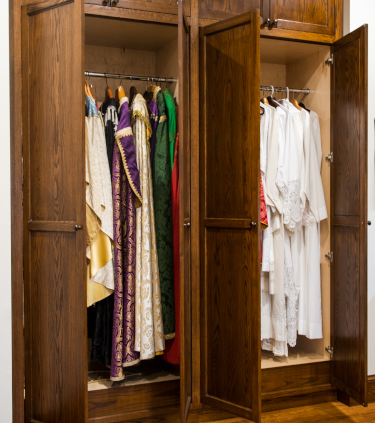 The newly reconstructed chaplain’s sacristy has been furnished with elegant cabinets and drawers designed to match the Chapel’s altar rails. These cabinets were specifically constructed to include spacious closets for hanging long copes, albs, and gothic chasubles, as well as drawers to lay out the chaplains’ roman chasubles. The acolytes’ sacristy sits to the right of the high altar, accoutered with the same style cabinets and complete with a walk-in closet holding the altar servers’ cassocks and surplices.

Before the completion of the sacristy, Head Chaplain Rev. Greg Markey made use of a makeshift sacristy in the Chapel’s basement. The completion of the permanent sacristy now aids in the unity of the liturgy and the connection between the priest and the servers. “For the past two and a half years, we were down in the basement that stored our vestments and sacred vessels,” says Fr. Markey. “The newly completed sacristy helps with the entire flow of the liturgy.” 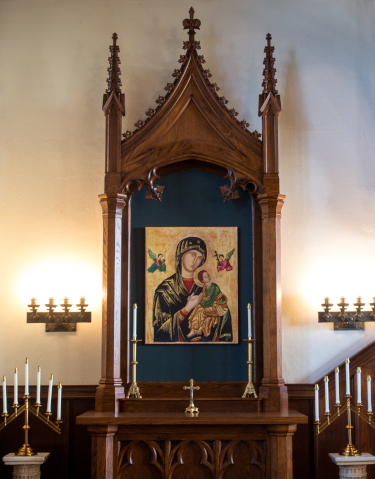 The work on the sacristy is part of a three-year project to transform the erstwhile Sage Chapel — built more than 100 years ago on the campus of what was then a Protestant boarding School — for Catholic worship. Among the other recent renovations was the installation of a side shrine to the Chapel’s patroness, Our Mother of Perpetual Help, a replica of whose miraculous icon has hung for the last two years just outside the Chapel’s sanctuary.

In a unifying manner, carpenters framed the shrine in a similar manner as that found in the alcove of the saintly statues on the high altar. The arching pattern remains the same, but the shrine’s space is rounded to accommodate Our Lady’s icon. “We have a beautiful blend of two art styles,” says Fr. Markey, “an Eastern-style icon placed into the context of a neo-gothic frame.”

Next painters will adorn the woodwork with exquisite gold leaf and blue hues, similar to those in the high altar. In due time, the College also plans to replace the replica icon with an original, written by a cloistered nun from the Monastic Sisters of Bethlehem in Bethlehem, New York.

Meanwhile, scaffolding has returned once more to the Chapel nave, as painters bedeck the Chapel’s ceiling with a resplendent azure blue coat complemented by detailed stencils. “We have plenty of work left,” said Fr. Markey. “But everything is in place to be completed before the dedication of the Chapel in March.”