Thomists from across the country and beyond arrived on the campus of Thomas Aquinas College, New England, earlier this summer for three days of fellowship, prayer, and rigorous contemplation of Christ’s redemption of the world.

“The Sacra Doctrina Project was founded by a group of young theologians in graduate study at Ave Maria University, two of whom were TAC graduates,” says Dr. Patrick Gardner, assistant dean for the New England campus. “So there was some relationship right from the beginning, and more than incidental — if you look at their mission statement, there’s remarkable agreement in principle between the sort of theological study they aim to promote at the scholarly level and the ‘good beginning’ in wisdom we aim to make here at the College.”

This mutual affinity between the organizations’ respective missions has led to some intellectual cross-pollination between the two. “I was invited to become an affiliate member some years ago, shortly after the group’s founding, and our head chaplain, Rev. Greg Markey, has also become an affiliate member of the SDP,” says Dr. Gardner. Working in the other direction, one of the SDP’s founding members, Dr. Taylor O’Neill, joined the College’s New England faculty in 2021, with another founder, Dr. Ryan Brady, joining later this year in California. Given this fruitful relationship, it is no surprise that the College came to host the SDP’s 2022 gathering. 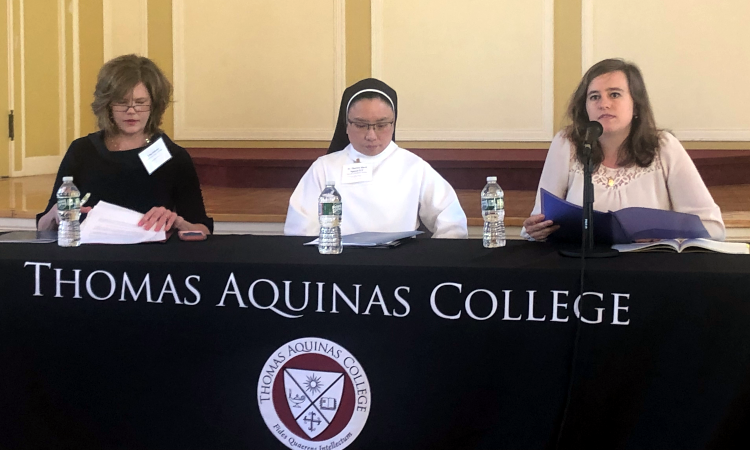 At the conference, attendees wrestled with questions raised by Christ’s redemption of the world and the Church’s mission of perpetuating that redemption through subsequent history. What does the undeniable need for redemption say about human nature’s relationship to the supernatural? Does sanctifying grace abolish or elevate human freedom? And what can we say about the beatific perfection of the next life?

The conference began addressing these and other questions with Fr. Thomas Joseph’s keynote, “Chalcedon Christology and the Concept of Pure Nature.” The next day, Dr. Daria Spezzano delivered the evening’s plenary lecture: “The Beauty of God’s House: Thomas Aquinas on Deification and Supernatural Glory.” On Saturday, Dr. Gardner delivered the afternoon’s plenary lecture, “Grace and the City: Infused Moral Virtues and Common Goods,” and concluding the weekend was Dr. Long’s keynote: “God and the Permission of Evil.” 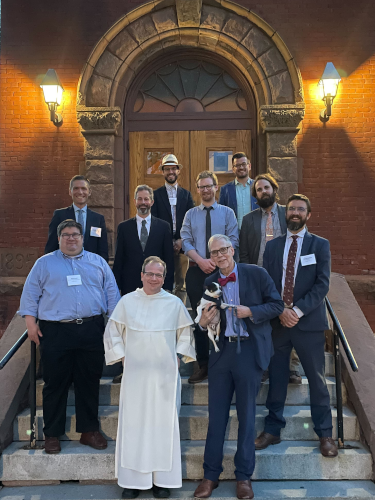 Between these more substantial presentations, nearly 50 scholars delivered papers and debated in moderated panels across campus. These discussions offered more limited treatments of a plethora of questions implied by the Conference’s theme, such as Mary’s role in the economy of redemption and sanctification, the function of the sacraments in communicating grace, and speculation about man’s lost Edenic state.

Several of Thomas Aquinas College’s own faculty presented papers in these sessions. Dr. O’Neill grappled with freedom in “Does Creating Free Creatures Necessitate the Risk of Sin? St. Thomas Aquinas and the Free Will Defense.” Dr. Joshua Lim delivered a lecture entitled, “The Instrumental Causality of Christ’s Humanity and the Angels: Ambiguities in Saint Thomas’s Account.” Dr. Josef Froula focused on Christ’s graced humanity with “On the Relationship between Christ’s Grace and Knowledge.” An incoming tutor gave a lecture, as well: Dr. Daniel Gutschke addressed the nature of the speculative life in “Contemplation and the Primacy of the Common Good.”

Sensitive to theology’s deep roots in the Church’s authentic faith, the SDP and TAC ensured that every day of the Conference began with Mass, with an evening Mass available between the panel sessions and the evenings’ plenary lectures. Attendees also had the option of praying Compline together in the twilit hush of Our Mother of Perpetual Help Chapel to conclude each day.

Overall, as with the Thomistic Summer Conference hosted earlier this summer on the California campus, the Sacra Doctrina Conference was a resounding success. “The Conference seemed to bear some fruit for many parts of the TAC community here — I’ve heard from tutors, chaplains, students, staff, and local friends of the College about how invigorating it was for their intellectual life,” says Dr. Gardner. “I heard from a number of visitors that the integration of the intellectual and the liturgical was a real strength of the Conference, especially given the beauty of our chapel and our liturgies. We were blessed to be able to host.”

Attendees left the conference enthused. “It’s really encouraging to see the bold and visionary mission of TAC (on the new campus),” said Fr. Thomas Joseph. “It’s just so encouraging also to see the youthful Thomistic movement that’s emerged in the United States in the last 15 years.” Others echoed his assessment: “The conference was like a spiritual retreat at a very high level; Mass and Compline were the natural complement to the excellent talks,” reflected participant Peter Orlowski. Another participant, Timothy Kearns, added, “Wonderful. I was especially grateful that all the talks and conversation had a sapiential dimension.”

“Thomism was alive and well on both campuses this summer,” laughed Emily Sullivan, coordinator for student support at TAC-New England. Taking a cue from that encouraging sign, the College hopes to continue promoting Thomism alongside the SDP for years to come.